How Many Presents Should Children Get for Christmas

In some ways, Christmas has become a time of excessive materialism and consumerism. Therefore, it's important to really ask ourselves how many gifts children should receive at Christmas. 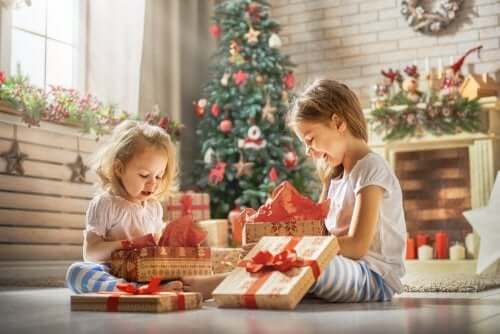 We all agree that there is no greater thrill during the Christmas season than seeing the excited faces of children opening the gifts that Santa Claus leaves under the tree. But how many presents should children receive at Christmas?

Increasingly, we’re turning Christmas into a time of consumerism and materialism, sometimes beyond our means. Presents from grandparents, aunts and uncles, their parents, and even friends and neighbors…

Many times, children choose a few favorites that they pay attention to for a few days, maybe more. But, with time, they forget all about them, given the overload of toys they have at home. What’s more, they start asking for even more new things.

Christmas starts when the first toy advertisements start appearing on TV and online, because everything catches our little one’s attention. In addition, stores and malls fill their aisles and window displays with toy after toy in order to appeal to children of all ages.

And no one can resist having all that in front of their eyes: They see it, and they want it. That’s why there’s a need to put a limit when it comes to the number of presents we actually purchase. After all, after a few days, children will only pay attention to a couple of toys among all those they’ve received.

Have you ever seen a child play with the wrapping paper or the box that the present came and completely ignore the toy itself? This says it all: Entertaining our children is often much simpler than we think, and they don’t need an excess of toys.

That’s why we need to really stop for a minute and think about how many presents our kids should get for Christmas. Going overboard isn’t only unnecessary, it’s harmful.

That’s why experts say that children up to the age of 2 should receive a maximum of two toys. This is because their attention span isn’t the same as that of an older child and they aren’t able to focus it for a long time on the same toy.

As they get older, you can increase the number of toys, but there’s no need to go crazy. Until the age of ten, children shouldn’t receive more than four or five gifts. That way, they’ll focus their requests on things they really want. What’s more, you won’t waste your money on things they won’t even pay attention to.

How many presents should children get for Christmas: The four-present rule

To answer the question asked at the beginning of this article, there’s something known as the four-present rule. It consists of giving children the following items for Christmas:

The importance of reflection and sharing

An overload of presents produces insatiability in children. The more they have, the more they want. The result of this overload is that, as they get older, they’re never satisfied with anything.

A good way to set these limits is to sit down with your child to write a letter to Santa Claus soon. That’s because, if you wait too long, your child will have already seen hundreds of toys that they’ll want.

If you start early, the range of possibilities will be smaller and, in addition, you’ll be able to shrink it down by establishing the limits that we talked about above.

Little Emperor Syndrome in Kids
Have you ever heard of the Little Emperor Syndrome in children? It is a psychological condition that alters children's behavior. They become authoritarian and try to exercise power and control over the rest of the family members. Read more »
Link copied!
Interesting Articles
Responsibilities and values
Which Groups Are Most Vulnerable to School Bullying

Responsibilities and values
Equality and Equity: Explaining the Difference to Children

At present, attempts are being made to give equal or fair treatment to vulnerable groups in society. This is the…