In this article, we'll explain the differences between active and passive bullying victims. 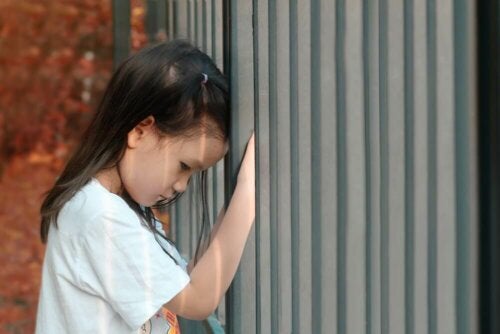 Children and young people who are victims of bullying suffer constant aggression and abuse by their peers. Such acts of violence can be physical, verbal, psychological, virtual, social, and sexual. In addition, depending on the attitude and characteristics of the victims, they can also be classified into several types. Below, we explain the differences between active and passive bullying victims.

You shouldn’t forget that students who are continually assaulted, regardless of how they react to bullying, experience very negative consequences that mark them for life.

Both bullies and witnesses suffer the negative effects of bullying. But the victims are always the ones who suffer the most, since they’re the ones who endure the taunts, insults, and humiliations in front of all their classmates. Thus, in general, these children are usually:

Active bullying victims are students who are rejected by their classmates. In other words, they’re highly unpopular.

They have a clear tendency to impulsiveness, acting without thinking and without choosing the most appropriate behavior for each situation. Due to this, they awaken negative reactions in others, such as anger and irritability. This causes the bullies to select them as their object of harassment.

We should note that students with some kind of disability or special educational need can be found within this group, as they can’t avoid provocative behaviors.

They’re considered typical victims, since they’re characterized by a social situation of isolation and passivity when it comes to defending themselves against their classmates’ attacks. Thus, they manifest vulnerability, fear, and anxiety when faced with school violence.

Furthermore, they can sometimes blame themselves for the continued harassment they’re subjected to, showing low self-esteem and thinking that they partly deserve it.

This last type fits both in the classification of victims and bullies, since these students have been bullies at some point. These are unpopular students who bully or have bullied others who are weaker than them but, in turn, are bullied by physically, socially, or psychologically stronger bullies.

Consequences of being a bullying victim

As a consequence of the bullying that victims suffer, they may manifest:

Bullying is a very serious problem that you have to try to tackle at school and at home. Likewise, you must take into account that the students who are more vulnerable to bullying or have a higher risk of suffering it are those who show personal or contextual characteristics that the bully believes makes them inferior.

For example, potential bullying victims could be children who:

In other words, students who are apparently different. Therefore, it’s very important to pay attention to these types of students and prevent bullying situations.

Children’s Books About Bullying
Bullying is one of the most difficult topics to talk about with childre. In this article, discover the best children's books about bullying. Read more »
Link copied!
Interesting Articles
Social environment
What to Do If Your Child Doesn't Play with Anyone at School