Being a Witness to School Bullying

School bullying is increasingly happening in educational centers around the world. However, even if you're not the bully, witnessing it doesn't make you less guilty of the situation. 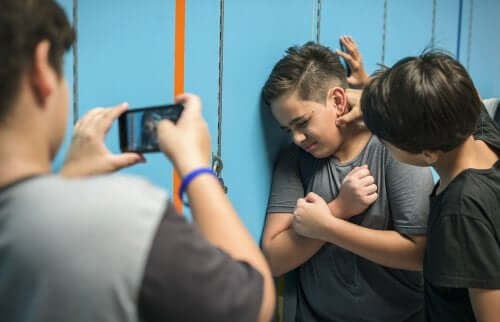 Nowadays, we’re accustomed to hearing about social and school inclusion. Nonetheless, every day in schools around the world, there are cases in which children may be the victim, aggressor, or witness to school bullying.

In order for children and young people to develop a positive coexistence among themselves, it’s important to instill good values. These certainly include respect, dialogue, cooperation, and empathy. Although, that’s not always enough. One of the great challenges that we still face is eradicating the occurrence of bullying at school.

What is school bullying and who is involved?

School bullying is a problem that manifests itself in schools around the world and a large number of students suffer daily. Above all, these students are subject to various acts of violence and harassment by their classmates.

If we have to think about the people involved, the first thing that comes to mind is the victim and the aggressor. That is to say, the affected person and the one who tries to make the victim’s life impossible through mockery, insults, and humiliation.

What happens to the classmates who act as spectators? We often forget the witness to school bullying has a fundamental role in perpetuating or stopping the violent situation and behavior, since they’re the direct observer of the aggression.

We have to keep in mind that the bully will feel stimulation or discouragement depending on the attitude of the bystanders. Therefore, we can state that there are three parties involved: the victim, aggressor and witness to bullying.

Types of witness to school bullying

Classmates who fulfill the function of witnessing school bullying can be classified as follows:

Consequences of being a witness to school bullying

During our childhood and adolescence, we’re vulnerable beings to what we observe. Children who witness bullying also suffer consequences due to the continuation of violent acts they witness. This makes them receptors of negative learning and habits. Thus, they can end up:

These children are usually affected by social contagion. This phenomenon consists of adopting the behavior of the dominant figure as a way of imposing oneself and seeking personal status. For this reason, some witnesses of school bullying learn to replicate the behaviors they observe in the aggressor.

Social contagion usually appears in children with the following characteristics:

In light of that, we must pay attention to the changes in behavior that children may have; both at school and at home. These negative behaviors may be due to the fact that they’re witnessing or participating in violent acts on an ongoing basis.

To prevent this, it’s very important to encourage them to reject violence and help those who need it. This way, they won’t incite the bully’s behavior and they’ll support the victim, either by listening, being a companion, or taking the victim away from the situation. Additionally, they’ll tell a trusted adult about the violent act that took place and they won’t be part of the bully’s followers.

The Role of Families in Putting a Stop to Bullying
Bullying is a social problem and it's our duty to try to put a stop to it. Below, you'll learn about the role families play in putting a stop to bullying. Read more »
Link copied!
Interesting Articles
Social environment
What to Do If Your Child Doesn't Play with Anyone at School