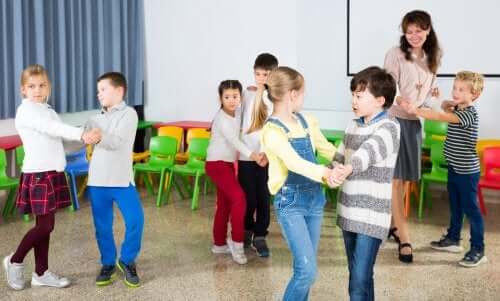 A new technique that more and more schools are adopting on a daily basis is the technique of activity breaks – also called active breaks – to improve attention in class. This is being carried out in many schools in different countries around the world.

A study on this subject

Seeking to prove the effectiveness of this idea, Jordan A. Carlson (Children’s Mercy Hospital, University of Missouri-Kansas City) and other authors conducted a study that sought to promote the movement of students during school hours and draw some definite conclusions.

These students were less likely to show a lack of motivation and were more attentive during class time. By the looks of it, the use of evidence-based programs to provide physical activity in the classroom appears to be a great strategy.

Activity breaks can be an effective way to improve students’ behavior and attention in the classroom. Most teachers who provided breaks that included physical activity claim that they were beneficial.

Many children are forced to sit in class for long periods of time without speaking. This is a real challenge for some, because there are some restless children who simply can’t sit still.

However, it’s possible to harness their energy in a positive way. It’s about finding new ways to improve learning. In many schools, the methodology used is that of activity breaks in the classroom, and the results are proving to be really positive.

These activity breaks are essential. At school, the recommendation is to take them every 50 minutes with intervals of 3 to 5 minutes. During these minutes, the teachers invite the students to get up from their seats and move freely around the class.

When teachers have a break in their classes in this way, the children will be more focused afterwards. This will also help to prevent the sedentary lifestyle that we’re increasingly prone to in our modern-day society.

One idea for the breaks could be to put on music and dance for a few minutes. Another option could be to do some mime exercises led by the teacher.

Active breaks can be linked to the content of the classes, or they can be free in terms of the subject matter. It’s totally up to the teacher to choose how to focus these breaks.

The most important thing here is to always remember that this activity isn’t a gimmick – it’s actually beneficial. Teachers have seen that once the activity break is over, the students come back to work more willingly and with more enthusiasm.

All in all, having these active breaks doesn’t mean losing a few minutes of class. It actually makes the minutes that follow it far more profitable. It’s harmful to children to just remain seated all the time working. This is something we must really bear in mind and start to put into practice in our schools.

How to Promote Empathy and Friendship in the Class
Achieving an atmosphere of empathy and friendship in the classroom can be achieved with some very simple guidelines and resources. Read more »
Link copied!
Interesting Articles
Social environment
The Davopsi Method for Classroom Organization

Noise pollution can have harmful effects on our health and cause problems on a physical, psychological, and social level. Therefore,…

Children's nicknames often have no negative intention, but sometimes those that receive them can feel bullied. Nicknames, in most cases, attempt…