A Simple Explanation of How Planet Earth Formed

The origin of the universe is a mystery that science will probably never be able to resolve. The formation of the earth is just one more guess, although the hypothesis that we'll present today seems to be correct. 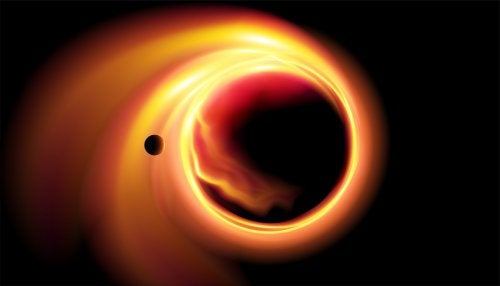 Our great planet was born some 4.54 billion years ago. Much has changed since that time when it was no more than a conglomerate of rocks and gases. High temperatures, high pressure, and explosions… We’ll try to provide a simple explanation of how experts believe the formation of Planet Earth took place.

The formation of planets

From this same cloud of stardust, Planet Earth and the sun came into form. First, the force of gravity on the cloud caused it to come together in small asteroids and then, in larger rocks.

As these larger rocks came together and fused, they came to be primitive planets. And then, as if someone was playing a cosmic game of marbles, they started to crash into one another.

These collisions generated a great deal of energy. And this energy along with the elements that made up these primitive planets caused an increase of temperature in their interior, melting the rocks. With the passing of time, the outer layers of Planet Earth began to cool down, although its nucleus would remain flaming hot.

The earth was located at just the right distance from the sun for this cooling-off to occur. However, Planet Earth remained an inhospitable and harsh place. It still lacked a gassy atmosphere and it was full of rivers of lava that were the result of volcanic eruptions. But this lava did nothing more than contribute to an increase in the earth’s crust.

As a result of these volcanic eruptions, the surface of the earth released primordial gases that produced the atmosphere. However, at that point, the atmosphere consisted of hydrogen, helium, methane, ammonium, noble gases, and some scattered oxygen particle.

The formation of water on Planet Earth

This incipient oxygen together with atmospheric hydrogen underwent optimal pressure and temperature conditions. As a result, they condensed into the precious water molecule that make life on our planet possible. In fact, to this day, life without the presence of water is inconceivable.

Land, sea, and air battled for a long time until each reached its place and they settled into layers. A flaming hot liquid core, oceanic and continental outer crusts, and atmospheric gases… these make the formation of Planet Earth a unique example, a priori, because of the organization of its stratus.

The layers that make up Planet Earth

The structure of the earth is really what makes it so special. The unique formation of our planet has 4 layers with their sublayers, with interconnection among all of them. These features make life on earth possible. But what’s more, Planet Earth itself is alive and in a state of constant transformation.

The geosphere is the layer that includes everything from the center of the Earth, the nucleus, to the earth’s crust. The radius of this sphere measures some 3,950 miles. It consists of various sublayers. These include the inner core, outer core, upper mantle, asthenosphere, lithosphere, and the oceanic and continental crusts.

The biosphere refers to the layer of the earth that hosts all of the living beings that inhabit our planet. Rivers, oceans, mountains, lakes, deserts… We can find living beings underwater up to 1/2 deep. At the same time, there are living things living up to some 6 miles above sea level.

“The sea is everything. It covers seven-tenths of the terrestrial globe. Its breath is pure and life-giving. It is an immense desert place where man is never lonely, for he senses the weaving of Creation on every hand. It is the physical embodiment of a supernatural existence… For the sea is itself nothing but love and emotion.”

The hydrosphere is the layer of Planet Earth that gathers water above and below the continental crust. It includes seas, lakes, rivers, oceans, polar ice caps, water vapor, and aquifers.

This layer covers up to 70% of the planet, although only 3% of this water is fresh water. The planet’s water goes through a constant cycle involving three states: Liquid, solid, and gas.

The atmosphere is a layer of gasses that culminates the formation of Planet Earth, acting like a giant dome. It protects us from the sun’s rays and small asteroids.

What’s more, it provides us with the perfect conditions for life thanks to its oxygen-rich composition (21%). This exact percentage varies by stratus and subdivides the atmosphere into three sublayers. These are the troposphere, the stratosphere, the mesosphere, the ionosphere, and the exosphere. All of these layers together have a total radius of some 6214 miles.

Movies that Teach Children About Ecology
It's important for little ones to learn to value and care for nature from a young age. Today we'll suggest several movies that teach children about ecology. Read more »
Link copied!
Interesting Articles
Social environment
What to Do If Your Child Doesn't Play with Anyone at School