Teach Your Child To Laugh At Themselves 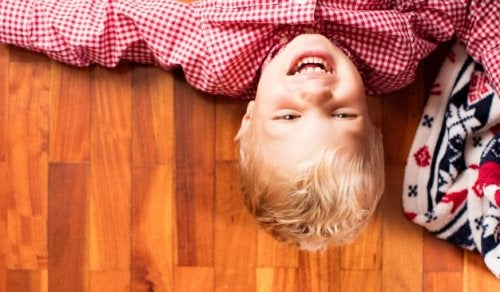 Learning to take a joke, telling good ones, and laughing at yourself are all part of emotional maturity. A good sense of humor helps give children the strength they need to get through the ups and downs of elementary school, as well as other times of their life.

The truth is that the sooner children learn how to laugh at themselves, the better. A child that knows how to take a joke, that understands the literal and figurative meaning of things, is usually more sure of themselves, and more assertive and brave – two very good qualities.

Having a sense of humor will not only prepare them to lead an adult life that is fulfilling, satisfying and ultimately happier, but can also become a sort of protective layer for when they face complicated situations growing up.

The ability to laugh at oneself doesn’t make the child immune to the more serious incidents and problems with interpersonal violence such as bullying, which generally is not a joke. The child should clearly understand that laughing at themselves is not a definite answer to victimization and attempted abuse by others.

Learning to laugh at themselves is a sign of emotional intelligence, balance and maturity, since it gives the child security and confidence. This is an effective tool for facing some instances of bullying.

It’s important to remember that in a possible case of school bullying or abuse, when a child seems confident, the bully will usually back off. And if they still try it, then that means that the child knows how to defend themselves, they know how to ask for help, they know their rights, and more.

Life Should Be Lived With Humor

Everyone’s daily lives, especially children’s, present many realities and experiences. Every morning we have to face life with sincerity and tackle awkward situations. We want to make it to the end of the day feeling as fulfilled as possible. One of the most effective tools that we rely on to achieve this is a sense of humor.

In many cases, telling the truth without humor and while looking to hurt feelings ends up sounding harsh and can harm the fragile self esteem of the child, or their future interpersonal relationships; something that happens from time to time.

One of the keys that can help resolve any lack of self esteem lies in discovering that we are all human and therefore we make mistakes.

It is also possible to laugh at one’s own failures in order to learn from them. One way of achieving this is with a game. A game is a more natural way of learning and is a wonderful way to encourage their natural curiosity, creativity and courage.

In Finland, where they boast an education system with the best results in the world, the boys and girls don’t do anything but play until they are seven years old.

Laughing At Yourself Improves Self Esteem

A vital tool for facing many life situations is a sense of humor, which helps us to improve our self esteem, which is to say, the relationship between our real and ideal self perception. When there is a big difference between both of these, it is a sign of low self esteem.

A sense of humor makes the gap between these two disappear. At this point, the child is able to laugh at their flaws, their hang-ups and any obstacles among many things. The child no longer asks others for recognition to feel good about themselves and accepts themselves just as they are.

Does this state of emotional maturity owe itself only to having developed a great sense of humor beginning in childhood? To answer that you would have to consider other social skills such as, for example, learning to say “enough.”

In a school environment, situations arise such as bullying, in which humor is second to self love, and the line between a healthy joke and aggression is thin. How do we tell them apart? Because a joke can only be considered a joke if everyone is in on it and no one is hurt. If this isn’t the case, then we are no longer talking about positive humor, but the opposite.

These days, cases of bullying in the classroom are more common. If school bullying was a matter of simple jokes, the situation could resolve itself with a strong personality.

However, this is not the case. The harassment that happens nowadays means that the victim is submitted to stress and violence for a prolonged period of time, which causes a significant negative impact on their life. It would be very bold to claim that having a strong personality would lessen the impact of bullying.