It isn't hard to find plays for children, as long as you're ready to tailor them, considering every child's abilities, needs and interests. 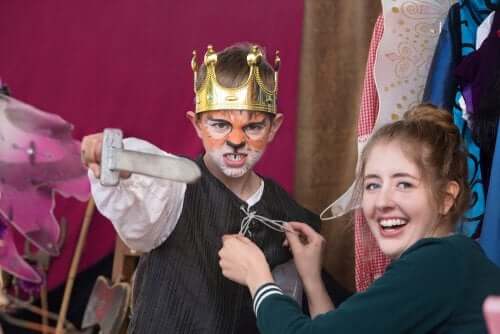 If you think of plays for children, certain ones may come to mind that you think they’d be great in. Theater is one of the basic activities required for learning. In addition, it has many benefits. For example, it helps children think about their individual or social problems.

Children explore the world around them by performing and doing theater. When they take on a character role or reenact a play, they use their real-world knowledge and experience to create a fantasy world.

At the beginning of each school year, many educators and drama teachers want to do a play with children. Thus, they may think about how to find plays for children that will allow them to have fun… and that the audience will enjoy!

The best advice is for teachers to become playwrights. Ideally, you should write the play you need yourself. For this purpose, you have to take into account things such as:

It’s necessary to adapt the play’s length and difficulty to the group.

Thus, once you know that there’s no universal database of plays for children, you can get to work. You need to start creating and writing.

However, it’s true that some well-known titles of books, movies, or stories can be adapted to a group of children. All of them will result in fun plays for children.

Things to keep in mind when writing theater scripts for children

Small children don’t know how to read yet. Therefore, it’s best to create a very short play, using something like a poem, song phrases, or a mini-story. In any case, the guiding thread will always be music.

Elementary school children have different capacities and development. For a theatrical activity, you can group children per school year by creating two subgroups:

For children from first to third grades, you need to write very short scripts. Therefore, the scenes will also be very short. Likewise, the text phrases should be short and the total duration of the play should be from 10-15 minutes.

Children from grades four to six can tackle more complex and lengthy theater scripts. Thus, the play can last a half-hour or even longer. Ideally, you should create many short scenes to fragment the texts and facilitate the work.

Stories you can turn into fun plays for children

Among the stories you can turn into fun plays for children, we decided to include some universal classic stories, children’s movies, and even books. Remember to create scripts specifically for each group.

Children of all ages can reenact the story of Peter Pan. It’ll definitely be fun for them! Children can reenact it by using their body language. In addition, the music will be the guiding thread. Also, you can adapt the script to both elementary and high school children.

An idea you can use, if necessary, is multiple characters. In other words, you can create as many pirates (boys or girls) as you wish. The Lost Boys can be many more (or less) than those in the original story. Also, Wendy can have as many brothers or sisters as you want.

Alice in Wonderland is always a great story for children to reenact. This is because children tend to have a lot of fun with the story and love the characters. Since the beginning of the proposal, your students will probably know which character they want to be. However, you’ll be in charge of making the decisions, taking their preferences into account.

For example, if three children want to be the Mad Hatter, you can have three of them in the play. And, following this technique, you can adapt the original story to your group. However, don’t forget to always remain realistic about the children’s abilities to avoid frustration.

Using the book or the film as a guide, you can create an amazing Neverending Story play. If some of the children of the group know the story, it’ll be interesting to hear their versions and, based on them, create the script.

Finally, you must remember that the most important thing when it comes to writing a play for children is to always keep the group in mind. Remember that not all plays can be reenacted by all groups. Also, it’s important to devote all the necessary time to doing prior exercises with them to get to know each child’s skills and interests.

Activities to Promote Reading in the Classroom
Teachers have an important role when it comes to making children read for fun. In this article, discover some activities that can help promote reading. Read more »
Link copied!
Interesting Articles
Children's stories
The Best Children's Books About Villains