"We’ve all got both light and dark inside us. What matters is the part we choose to act on...that's who we really are." Sirius Black, from the Harry Potter saga. 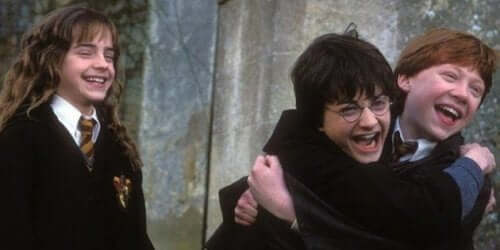 Those of us who have grown up reading the Harry Potter series know that the stories go far beyond mere magic. Through the values of hard work, friendship, love, and bravery, Harry Potter teaches valuables lessons to readers.

Continue reading and discover 6 life lessons for children (and adults) we want to share with you from this legendary book series.

What are the greatest lessons children can learn from the Harry Potter saga?

1. You have power over your own destiny

In Harry Potter and the Sorcerer’s Stone, the main character teaches us a valuable lesson as soon as he arrives at the Hogwarts school of witchcraft and wizardry. The first-year students must each put on a magic sorting hat in order to be assigned to one of the four schools of Hogwarts.

When it comes time for Harry’s turn, the sorting hat assigns him to the house of Slytheryn. However, our beloved protagonist rejects this assignment, as he knows very well that he wants to belong to the house of Gryffindor.

And so he teaches us that we have the power to make our own decisions, and we should be the ones to decide our own future.

“It is our choices that show what we truly are, much more than our abilities.”

2. It doesn’t matter where you come from when it comes to reaching your dreams

Harry Potter’s best friend, Hermione Granger, is the most brilliant student at Hogwarts. However, she feels that others discriminate against her because of her roots.

She is the daughter of two muggles – in other words, non-wizards. However, this reality is by no means a barrier for her. Despite her origins, she continues to work hard in order to accomplish everything she sets out to achieve.

“It matters not what someone is born, but what they grow to be.”

3. Being brave means being able to face your fears

In Harry Potter, bravery is one of the greatest virtues. Throughout the book series, we can observe many characters acting, and this isn’t true only in regards to the house of Gryffindor. However, there is one character in particular that demonstrates exceptional bravery, and this is Harry himself.

From the very beginning of the series, Harry must face all sorts of terrible situations and daunting beasts, such as Dementors. And when the time comes to face his greatest fear, Lord Voldemort, Harry doesn’t hesitate.

4. What others think doesn’t define you

In Harry Potter and the Prisoner of Azkaban, we meet Sirius Black, Harry’s godfather and best friend to his deceased parents. Despite the negative opinions and lies that others have spread about him, Sirius finally shows Harry and everyone else who he really is.

However, throughout all of the books in this series, the opinion of others regarding Harry is always an issue. Harry often feels the hate of his enemies and the indifference of those who constantly look at him with disdain and distrust. However, our hero always presses forward despite the difficulties that he experiences in his life.

5. Don’t judge a book by its cover

Through the character of Severus Snape, potion master, we learn the lesson that appearances can be misleading. What’s more, there’s always a story behind each person’s actions. Therefore, it’s important to take time to know people before making judgments.

Furthermore, Snape’s character teaches us another valuable lesson. That is, even though knowing how to forgive and love isn’t always easy, doing so without a doubt makes us better people.

6. Love and friendship are the most powerful forces in the Harry Potter saga

Each Harry Potter book is brimming with magic and great wizards, but that’s not all they’re about. Author J.K. Rowling shows us that love and friendship are what truly matters and what are truly powerful in life. These were the two elements that prevailed and saved the main character of this unforgettable saga.

In conclusion, what the Harry Potter stories teach us is that the will to face one’s problems has a great deal to do with those around us. When we surround ourselves with faithful and supportive friends, they make us even stronger.

“I say to you all, once again – in the light of Lord Voldemort’s return, we are only as strong as we are united, as weak as we are divided.”

So now that you’ve taken a closer look at the Harry Potter series, why not introduce these books to your children? Or make it a point to watch the movies together. And of course, take time to discuss each of these valuable lessons as a family.

6 Books to Stimulate Creativity in Children
One of the best ways to stimulate creativity in children is with reading. In this article, discover six books that can help! Read more »
Link copied!
Interesting Articles
Children's stories
Halloween-Themed Children's Books