Do You Know the Story of The Three Kings?

From the Far East, The Three Kings –or Wise Men – come to our homes on the eve of January 5. Read today's article to discover more about this holiday tradition. 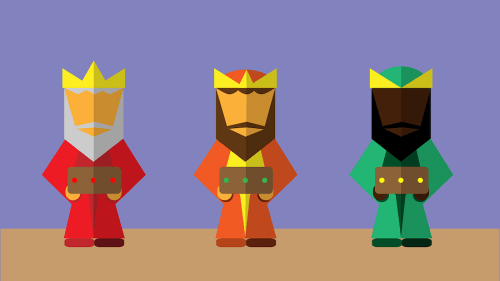 Melchior, Caspar y Balthasar. These are the protagonist of the story of The Three Kings. Most of us have heard of the three kings, but do you really know the story and traditions behind these characters? We’ll tell you more in today’s article!

Story of The Three Kings and the road to Bethlehem

The Three Kings – wise men from the East – were following an unusual star that took them to Bethlehem. Bethlehem was the place where Jesus was born, and they wanted to worship him and bring him gifts that were very valuable at that time.

It wasn’t until the 4th century that the story began to mention that there were three kings – based on the number of gifts they offered. Up until then, versions of the story mentioned numbers between 2 and 12, like the number of apostles.

This is also when people started referring to them as kings. Before this, people simply believed they were wealthy. As a side note, the word magi comes from Persia and means priest.

In the 8th century, the 3 kings received their names: Melchior, Caspar (or Gaspar), and Balthasar, as they appeared in an Italian mosaic. In the 16th century, people began to believe they represented the three races that existed in the middle ages.

Traditions regarding The Three Kings

Many countries around the world celebrate The Three Kings, especially in Europe and Latin America. In Portugal, for example, people take part in singing special carols – “January songs,” known as Janeiras.

In Austria, people hang chalkboard signs on their front doors to remind them that the kings visited baby Jesus. In Ireland, women celebrated “Women’s Christmas,” where they get the day off, and men have to do the housework.

In some countries, like Spain and Argentina, children leave out snacks and drinks for the kings, as well as water and hay for their camels. In return, the kings leave gifts for the children.

In many Spanish cities, the story of The Three Kings tells that rather than arriving on camel, the kings came on horseback.

The Three Kings are also popular in the city of New Orleans. Some choose this date to take down their Christmas trees, while others replace the ornaments with purple, gold and green ones in order to make a Mardi Gras tree.

Another common tradition related to The Three Kings is to celebrate with a special cake. In New Orleans, for example, people make a sweet cinnamon pastry called King Cake. Within the cake, they hide a small plastic doll (representing Jesus). Whoever gets the piece containing the baby is responsible for providing the next King Cake.

Make your own King Cake

You and your family can make King Cake a new part of your holiday traditions by following the recipe below:

And don’t forget your tiny plastic doll! Once you have all of your ingredients, click here for the full preparation instructions. Then you’ll be ready to host your own King Cake Party.

Whether you hold your party at the end of the Christmas season, as in some countries, or during lent, per the New Orleans tradition, we’re sure you’ll want to make it an annual event!

6 Ideas to Decorate Your Yard for Christmas
Do you want to decorate your yard for Christmas but don't know how? We'll show you a few easy, beautiful and perfect ideas to make with your whole family. Read more »
Link copied!
Interesting Articles
Children's stories
Halloween-Themed Children's Books