Costumes and children's theater are closely related. In this article, discover some activities that you can do to work with these powerful tools. 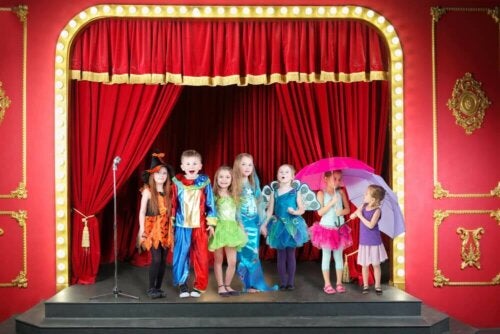 Theater and theatrical play are complete tools for children to develop their creativity. Costumes and children’s theater are closely related, since costumes help give characters unique personalities and nuances.

We aren’t just referring to school theater. In fact, children can also spend entire afternoons doing theater, by acting, role playing, imitating, putting themselves in someone else’s shoes, and pretending they’re someone else at home.

With theater, they can learn new stories. But don’t forget that children can also come up with their own stories! Theater allows children to boost their imagination, empathize with others, and better understand other people’s feelings and emotions.

Theater also helps develop body language and verbal expression. In addition, theater exercises memory in a fun way, without children even realizing it.

If you’re going to create a play with children, all you need is desire, a little organization, and to think about the clothes, since costumes and children’s theater are a whole. There’s no children’s theater without a character costume!

Once you think about and look for the clothes they’ll need and come up with the makeup, and even the hairstyles, you’ll be able to create a beautiful stage that helps them with the dramatic play.

Dressing up when doing theater favors the development of children’s abilities. The costume creates the ideal imaginary situation to develop symbolic games. By doing theater, they’ll strive to work their vocabulary to communicate what the character feels and understand what the other characters are expressing.

Dressing up shouldn’t have specific rules; it’s a game in which anything goes. No costume is better than another. The fear of making a fool of themselves disappears completely. When it comes to creating a character and thinking about the costumes, it’s best to talk to the child so that they can express how they imagine that their character is dressed and help them get everything they need.

Activities with costumes and children’s theater

You can create a “costume corner” at home or in the classroom. It’s something that all children really love and enjoy. For this, look for several large boxes to separate the garments. Put the pants in one box, skirts in another, and hats, headdresses, and wigs in a different one. You can store accessories, bags, ties, scarves, and bracelets in a fourth box.

In this activity, invite children to create a character. They’ll think about who they’re going to be and, based on their description, they’ll look for the external elements they need to make their character.

When they’re dressed, you should start telling a story (invented on the fly, it doesn’t have to be complicated) while they play and act out what’s happening through their body language. Also, they may say small improvised phrases. It’s a very complete exercise to work on creativity.

Give a group of children the title of a play; it doesn’t have to be real. In fact, it’s better if it’s something simple and invented. Give children 10 minutes to dress up as their characters and do a short rehearsal of what the play will be.

Then, through improvisation, they should perform for the other groups. Thus, all the children will take turns being the audience and all will be actors at some point in the activity.

We’re sure they’ll love this activity because it allows them a lot of autonomy to create their own story and, thus, do theater. Once they put on their mini-theater, the audience that was watching will comment on what they’ve seen, what they liked best about the story, and even if they would add or eliminate something.

In short, for a child, coming up with and putting on a costume is the ideal way to let their imagination fly and create infinite stories and characters, thus boosting their creativity and autonomy.

Learn All About Theater Pedagogy
In this article, you’ll discover what theater pedagogy is all about, as well as its importance to facilitate learning in students of all ages. Read more »
Link copied!
Interesting Articles
Activities and games for kids
The Role of Parents in Children's Sports