Some Terrifically Fun Crafts for Halloween

These Halloween crafts will delight the little ones in your house, because they'll create them with anticipation of one of the most fun times of the year. 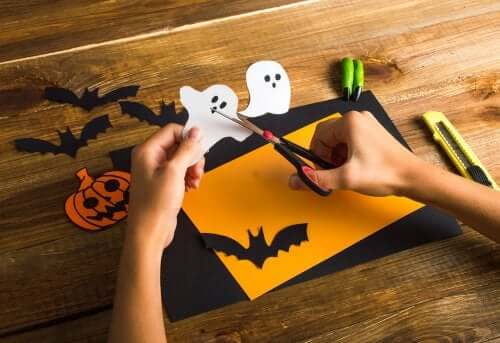 On the night of October 31st each year, Halloween is celebrated in pretty much everywhere around the world. Houses, shops and even streets are decorated to celebrate “the day of the dead.” Stay with us as we bring you some great crafts for Halloween to make with your kids.

Each celebration has its own specific theme and, of course, Halloween is related to fear, monsters and creepy-crawlies.

Children love this celebration because of all that it implies: costumes, make-up, parties, and fun. So, every year, the celebrations often get bigger and bigger and more and more successful.

To start preparing for this day, today we’re going to bring you a selection of Halloween crafts that will delight all children, because it’ll help them to look forward to the day arriving.

As we’ve already said, Halloween is synonymous with terror, fear and darkness. The element that best represents this festival is the famous orange pumpkin but, undoubtedly, others like vampires, ghosts, blood or spider webs are also very popular items in this festival.

So, here are some of the simplest, but fun, crafts that your children will love to make before dressing up and putting on their make-up for the day. Let’s get started!

Bats are one of the most representative elements of the Halloween festival. For this reason, creating a garland of bats will be an activity that children will love, as well as being something so simple that they’ll even be able to make it themselves.

The first step will be to draw on a separate sheet of paper the shape of a bat. That shape will then be traced onto black paper. Once you’ve traced it, you’ll need to fold the sheet of paper as many times as you want, leaving just enough space to cut out the bat. Think of an accordion and you’ll get the idea.

The last step will be to cut out the figure that’s left on top, although, of course, you’ll also be cutting out the others at the same time. Once cut out, you’ll just have to open the strip of paper and…voila!

Would you like to fill your house with ghosts and pumpkins in a fun and yet simple way? Sometimes, decorating a pumpkin is hard work. It can take a long time and end up demotivating the children. However, to create these ghosts and pumpkins we’ll be using something they love: balloons!

The steps are simple. First, blow up the balloons. Then draw on the black card the faces you want both the ghosts and the pumpkins to have. There are a thousand different possibilities here and you can check some out online.

The third, and final, step is to cut out and glue each of the shapes you have created onto the balloons. You’ll soon have your ghosts and pumpkins ready to be placed all over the house!

3. Halloween Crafts: The monsters are arriving

This is one of the crafts that your children will undoubtedly like the most, as, in addition to being able to create different terrifying characters, they’ll be able to play with them afterwards. The basic element in this craft is one you’ll find easily in every household (start saving them now!): toilet roll middles.

To decorate them, you’ll need:

With these simple materials, you can create pumpkins, vampires, ghosts, and even Frankenstein! In this craft the most important thing is creativity when creating each of the characters.

4. A funny witch for Halloween

By using some disposable plastic plates, you’ll have an endless number of Halloween characters for your home. In this case, we’ll show you how to make a witch, but, with a little imagination, you can create any monster you like.

Choose which side of the plate you want to decorate, and draw, or find on the internet, the face of a terrifying witch in the center. After this, you’ll need to create her scary hair. To do this, ask your children to trace their hands on the orange card four times, twice for each hand, and then cut them out.

The third step is to create our witch’s hat and you’ll need the black card for this. To do this, you must take into account the size of the plate, so that the hat isn’t either too big or too small. Then, finally, on the purple card, draw and cut out a small strip, which will be the union between the upper part of the hat and the lower part.

Once you’ve created all these elements, the last step is to place them on the plate and glue them on. The hair should be underneath the hat, making it stick out from the sides to look as realistic as possible.

Have fun making these crafts!

Crafts Projects for Kids: a Helpful Guide
Sometimes, it's a lot more fun to make toys at home along with your little ones. Read this article to learn some fun crafts projects for kids. Read more »
Link copied!
Interesting Articles
Activities and games for kids
The Role of Parents in Children's Sports