For the Birds: A Short Film to Reflect on Diversity

Children have to learn to respect and accept diversity from an early age. The short film "For the Birds" is one resource you can use. 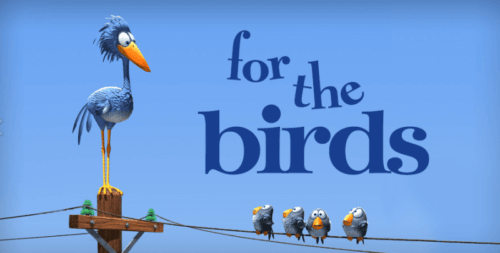 For the Birds is a short film, approximately 3 minutes long, produced by Pixar in 2000. Despite the fact that 20 years have passed since its premiere, the message it aims to convey is still very much relevant in today’s society, as this short film invites us to reflect on diversity and the importance of inclusion.

Ralph Eggleston, the scriptwriter and director of the short film, deals with this topic in a very funny and original way. For the Birds has won several awards, including the Oscar for Best Animated Short Film in 2001.

For all these reasons, we recommend that you watch this wonderful short film with your children. What are you waiting for?

For the Birds: a short film to reflect on diversity

For the Birds stars 15 small birds, all with a very similar appearance, and one large bird, physically very different from the others. The small birds are all perched on a power line when the large bird appears to greet them from the lamppost. However, because the large bird looks so unlike them, they begin to mock and laugh at him.

The big bird decides to stand on the power line, together with the rest of the group, and stands right in the middle. This is very annoying for the small birds, because the cable, due to the weight of the large bird, starts to collapse.

One of the little birds, very angry, begins to peck at the body of the big bird. This only aggravates the situation, since it makes the bird fall and remain hanging from the cable, holding on to it with its claws.

Two of the small birds, not satisfied with what happened, decide to peck the fingers of the big bird. But, suddenly, they realize that if it falls, the power line will snap back up and send them flying into the sky. And, in fact, this is what ends up happening: The little birds are propelled upwards with such speed that all the feathers on their bodies fall right off.

In the last scene, the little birds are on the ground, very embarrassed because they have no feathers. However, the big bird remains in perfect condition. So, the larger bird ends up laughing at those who laughed at him before because he looked different. This story, besides helping us reflect on diversity, teaches us and reminds us of a basic rule of coexistence:

“Do unto others as you would have them do unto you.”

Importance of learning to respect diversity

Like the little birds in the short film, children must learn to respect and relate to all kinds of people, regardless of their characteristics. As a result, according to educator and psychologist Juan Manuel Escudero Muñoz, over the years, they’ll acquire a series of values related to the ethics of:

These aspects must be worked on and practiced in the educational and family context, since they’re the two environments in which children learn to understand, communicate with, relate to, and live alongside other people.

Therefore, both from school and from home, we must take responsibility for training children in values, educating them in respect for diversity, collaboration, and positive coexistence. Only then can we create a better and more inclusive society for the future.

“If we teach children to accept diversity as something normal, it will not be necessary to talk about inclusion, but about living together.”

Mr. Indifferent: A Short Film About Helping Others
Do you want to teach your children the value of helping others? Today, we'll present you want a short film that deals with this subject.  Read more »