Fun Games to Play in the Yard with Your Family

Today we want to offer you a selection of game ideas that you can play in your yard. We're sure you and your children will have a great time while you build lasting memories. 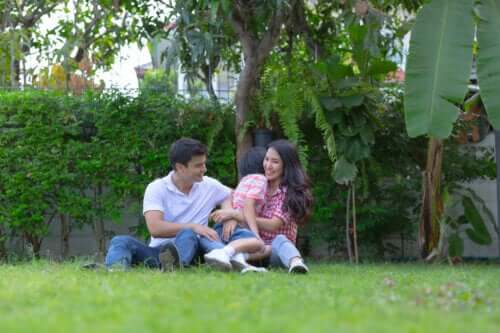 If your home has a yard and you want to take advantage of the outdoors to have fun with your children, don’t miss this article. We’ll give you a detailed explanation of a series of entertaining games to play in the yard with your family. Not only will you have a great time, but you’ll also create memories that your children will never forget.

“Play keeps us lively and alert. It gives us an enthusiasm for life that cannot be substituted. Without it, life has no flavor.”

Fun games to play in the yard

In order to play this game, you’ll need a ball and a bandana or cloth that you can use as a blindfold. To begin, players must sit on the ground in a circle while one player sits in the center. This player must put on the blindfold.

The game begins when the rest of the players begin to pass the ball around the circle as fast as they can, pretending it’s a bomb. In the meantime, the player that’s in the middle must start counting to 30 and give the following instructions out loud:

So, when the bomb “explodes”, the person who’s holding the ball at that time will be eliminated. The game continues until only one player is left.

For this game, you’ll need a wooden spoon and, once again, a bandana or scarf to use as a blindfold. Just like in the previous game, the participants need to sit in a circle while one player stands in the center, covering his or her eyes with the blindfold.

What’s more, the same player that’s in the middle should be holding the wooden spoon. His or her mission is to try to use the wooden spoon in order to touch any other player in the circle. But it’s not as easy as it seems, since the rest of the players can dodge the spoon by leaning from side to side. However, they must remain seated in their spot.

When the player in the middle manages to touch someone with the spoon, that person must say “coo, coo.” Then, if the blindfolded player guesses who he or she touched, the players trade places. However, if he or she fails to guess correctly, then the game will continue as is.

The hidden chalk, one of the best games to play in the yard with your kids

When the player is finished hiding the chalk, the rest must leave the safe zone and explore the yard until they find it. If the task becomes too difficult, the person who hid the chalk can offer clues about where he hid it.

As soon as one of the players finds the chalk, he or she must run after and write on as many players as possible before they reach the safety zone. Any players that he or she manages to write on will be out, while the player who found the chalk will be the next one to hide it.

Why You Shouldn’t Let Your Child Win at Games
Many psychologists are clear that losing teaches us more than winning. Today, we're going to look at why you shouldn't let your child win at games. Read more »
Link copied!
Interesting Articles
Sports and activities
4 Dangers of Inflatable Pools: What You Should Know

With the arrival of summer, inflatable pool sales go sky-high. There are many parents who decide to set them up…

Play and free movement are fundamental parts of the growth and development of small children. Therefore, it's crucial that parents…

Sports and activities
The Benefits of Tangrams for Children

A tangram is an activity that goes back over a thousand years to ancient China. According to experts, it arrived…

Sports and activities
5 Children's Apps for Learning Math Through Play

New technologies have led to a wide range of apps for electronic devices. Our cell phones and tablets would be…

Sports and activities
How to Make Your Own Musical Instruments

Wouldn't you love to play music with your kids? If you don't have any instruments, then you've come to the…