What Is Unstructured Play and Why Is It Important?

Unstructured play is very important for child development. It teaches little ones to deal with the unexpected and to have positive interactions with others. 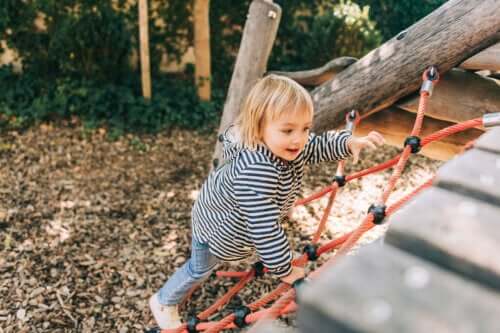 Unstructured play is play without predetermined rules. There are no organized teams, uniforms, coaches, or physical trainers. It’s spontaneous, often invented on the spot, and changes as the day progresses.

It’s the kind of game you see when little ones chase each other around a yard in endless circles. Or when a group of children play for hours in a fort they created out of old boxes.

Unstructured play is fun, naturally, but research also tells us that it’s vitally important to the development of children’s bodies and brains. One of the best ways to encourage unstructured play in young children is to provide them with open-ended toys. In other words, toys that they can use in a number of ways.

Unstructured play is important in childhood

Here are some reasons why unstructured play is crucial for children. Upon reading them, you’ll be able to understand why it’s important to encourage this type of play in your children’s daily routines.

Unstructured play changes the structure of the brain in important ways

Play changes the structure of the developing brain in important ways. It also strengthens the connections of neurons (nerve cells) in the prefrontal cortex. This area of the brain is considered to be the executive control center responsible for solving problems, making plans, and regulating emotions.

Because unstructured play involves trying different strategies without particular goals or serious consequences, children and other animals can practice different activities during play to see what happens. Unstructured play teaches them how to deal with the unexpected, a skill of great importance in today’s uncertain world.

Many different things in our lives affect gene expression (whether a gene is active or not). These factors include our environment and the activities in which we participate. Jaak Panksepp, a professor at the University of Washington, studied play in rats.

He found that even half an hour of play affected the activity of many different genes and activated the outer part of the rat’s brain known as the neocortex. This is the area of the brain used for higher functions such as thinking, language, and spatial reasoning. We don’t know for sure if this happens in humans, but some researchers believe it probably does.

Teach children to interact positively with others

It was originally thought that play in animals was simply a practice that could make them more effective hunters. However, Dr. Panksepp’s study of rats led him to conclude that play had a completely different function. It teaches young animals to interact with others in a positive way. He believed that play helps develop prosocial brains.

Social skills acquired through play can help children become better students. Research has found that the best predictor of academic performance was a child’s social skills.

We all worry that our children do very little physical activity since they spend a lot of their time glued to their electronic devices and only their thumbs get any exercise.

Unstructured play, whether it’s running in the yard, climbing trees, or playing on playgrounds in schools or public parks, means moving the whole body.

Physical activity helps children maintain a healthy weight and fights the development of type 2 diabetes, a very common condition in children, by increasing the body’s sensitivity to the hormone insulin.

In today’s busy world, it’s tempting for parents and children to fill every minute of their day with structured activities. Activities range from pre-school language classes to soccer and basketball practice. And a wide range of special classes and camps on weekends and summer vacations.

We often underestimate the importance of having time for unstructured play – time for children to get together with absolutely nothing planned, and no particular goals in mind except to have fun.

All of this, during childhood, is very important. In fact, it’s just as important as learning academic content. So, if you want your children to have a good future, let them play unstructured games!

Imitative Play Strengthens Empathy and Socialization
Through imitative play, children begin to understand their surroundings, and learn to function within them. All this happens naturally. Read more »
Link copied!
Interesting Articles
Sports and activities
7 Sensory Activities and Crafts for Restless Children

It's always a good idea to look for new ways to help entertain your children. Today, we'll offer a series…