Games to Teach Children the Alphabet

Are you looking for a fun way to teach children the alphabet? Games are the best option but don’t just settle for the first one you find! Try all our options because every child learns in a different way. 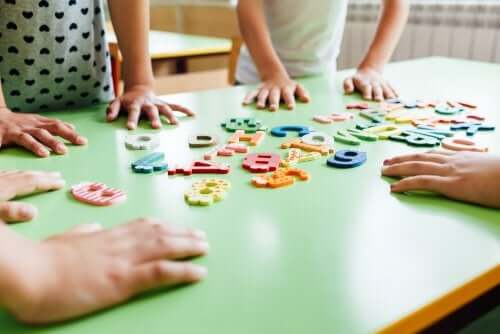 The first steps of learning and games always go hand in hand. Learning should be fun and capture children’s attention. For this reason, we’ve compiled the best games to teach children the alphabet.

When children learn the alphabet, they need to investigate and explore their environment and everything around them. Using this to your advantage is a great idea, as they’ll be interested from the get-go. Something as simple as wooden letters is a good starting point.

Let children take, move, and rotate them. Now, for example, write the alphabet or their name in capital letters, so they can recognize the letters easily. Then, tell them to find the letters with the same shape and place them on the ones that you wrote. It’s very similar to the game of putting geometric shapes through the correct hole.

How many times have you drawn the hands of your children on paper and they were shocked when they saw that their hands were still drawn once they removed them?

Why not try the same thing with letters? They can form simple words, such as the names of their family or pet. This way, little by little, they’ll also learn what those words mean.

Game 3: A letter and a drawing

For this game, you can use animals or everyday objects that children can easily recognize. The more familiar with words they are and the easier they are to pronounce, the better.

As graphical representations are very important, the goal is for each letter to be associated with its representation. For example, the “a” can be an airplane, the “g” a gorilla, and the “f” flowers. If you try to use several drawings of words that begin with those sounds, it’ll be much easier for them to remember the alphabet.

The dynamics of this game are very simple and will help children remember the order of letters. To do this, all you need is paper and a pencil. Write the alphabet on the piece of paper and assign a number to each letter (A 1, B 2, C 3…).

Take the numbers as a reference and write a word or short phrase only with the corresponding numbers. The child will have to exercise their abstract thinking, writing, and capacity to relate numbers and letters.

In addition, they can go one step further. Let them write their own secret messages to see if they can communicate like real spies.

Other games to teach children the alphabet

There are dozens of games to teach the alphabet because creativity has no limits. You’ve already seen some of them. However, now we’re going to focus on other games for smaller children. Because how can you teach the alphabet to children who still don’t know how to write?

The simplest (and most effective) option is using songs. Musical memory is amazing, as people remember the lyrics, rhythm, and melody of a song even after a long time has passed or although they believe they forgot it.

Why not use this to your advantage? Children will have fun while learning to recite the letters of the alphabet.

Another option is that, if the child has an alphabet in front of them, they should follow the letters with their fingers while they’re singing the song. This will allow them to associate sounds with spelling.

Alternative games, such as mimicry, help children relate the shape of the letters to their name. You can do this in multiple ways to allow them to exercise body language and abstract thinking:

In addition, the game of reading lips helps children better enunciate letters when they speak. And, as they have to exaggerate the shape of their lips and the position of their mouth, it’s a great exercise in pronunciation.

Games to Teach Children Spelling
Using games to teach children spelling is a great idea since they provide many benifits, such as improving teamwork, communication, memory, and logic.  Read more »
Link copied!
Interesting Articles
Games and cartoons
Why Do Children Love PAW Patrol So Much?