Why Do Brides Wear White on Their Wedding Day?

Wearing white on your wedding day seems to have been a tradition for centuries and centuries. But surprisingly, this isn't true. This practice only took root in our culture beginning in the 20th century.  Learn about this topic and other wedding day traditions in this article. 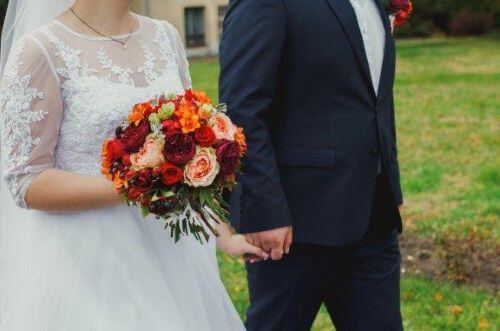 White is still the usual color of choice for brides today, even though more and more women are choosing to wear other colors. But do you know the origins of why brides wear white on their wedding day? We’ll explain this and other wedding day traditions below.

Why do brides wear white on their wedding day?

Although it’s easy to just assume that brides have always traditionally worn white, this isn’t exactly true. It wasn’t until the 20th century that white became the predominant color for wedding gowns, even though it seems like a long-standing tradition.

Dress colors in the Middle Ages

In the Middle Ages, brides used different colored dresses to enjoy the day. Actually, in 1660 the Spanish infante Teresa of Spain wore a black dress to her wedding with Luis XIV of France.

It wasn’t until the 19th century that brides started to dress in white. This was the color of the Queen of England’s wedding dress in 1840. Queen Victoria’s wedding was one of the most spectacular weddings in the history of England and it was celebrated in the newspapers everywhere.

Paintings showed the Queen bride dressed in white. Queen Victoria even posed for a reenactment photograph in her wedding dress later when photography became available.

Although it’s true that up until the 20th century, white was only used by the rich and powerful families of the era, it was from this moment that the color white started to take root. It became the official bridal color as it was slowly adopted by all social classes.

The significance – why brides wear white

The significance of the color white has stayed the same, despite the passage of years. When brides dress in white, they want to express purity, innocence, and candor.

Although the significance and the predominance of the color white hasn’t changed, some brides use different shades of white that weren’t common before.

Off-white and ivory are variants that are used frequently today. In this way, the range of possibilities is even greater when it comes time to choose a dress for your wedding day.

Wearing something new symbolizes the changes and new experiences that’ll be lived in this big step called marriage. It can be something simple because most of what the bride wears on her wedding day is new.

Indeed, the wedding dress the bride wears is usually something new itself. The gown can serve as the “something new” and easily abides with this tradition.

In the same way that wearing something new signifies the future, wearing something old symbolizes the past. Brides wear something old to show the continuity in family ties and friendships, in spite of the marriage. The objects used to follow this tradition are usually some family heirloom or your mother’s or grandmother’s veil.

Today, many brides are breaking with this cliché about leaving friends and family behind to show that they’ll still always be themselves. You can use everyday objects to signify this, like your perfume or the lipstick that you most use.

Wearing something blue doesn’t break with the tradition of brides wearing white, rather it’s another tradition in itself. This color symbolizes love and fidelity with your partner.

You have the possibility of using the color in some discreet accessory, like the garter, or otherwise in something more attention-getting, like your shoes.

Types of Couples that Last, According to Science
Believe it or not, science has managed to classify the types of couples that last. So, where does your relationship stand? Read more »
Link copied!
Interesting Articles
Games and cartoons
Why Do Children Love PAW Patrol So Much?