Klaus: An Animated Movie with a Very Important Message

Are you planning a family movie night and don't know what to watch? Klaus can be a very good choice. Learn all about this animated film in the following article. 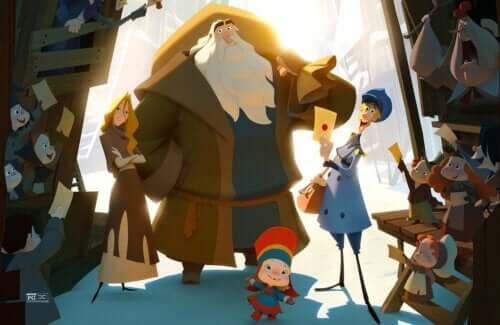 Klaus is a Spanish animated movie that every family should watch in their homes. It touches on very important and valuable messages for the personal and vital development of people.

The film premiered in November 2019, and the audience received it very well. The reviews were also very positive. In fact, it won many awards, and it was nominated in the 2019 Academy Awards for best animated feature.

All these recognitions are due to the original way in which Sergio Pablos, director and screenwriter, described the legend of Santa Claus. Have you seen this movie yet? What are you waiting for?

Klaus is the story of Jesper, a spoiled young man, who used to live without a job. So, his father, who was in charge of the post office, decides to teach him a lesson and sends him to Smeerensburg, a cold and isolated town in the Arctic Circle, to work as a postman. There, he has the task of delivering 6,000 letters in one year. If he doesn’t do that, he’ll be cut out of his father’s will.

In the beginning, Jesper thought it was an easy task. However, once he gets there, he finds out that people in town live in constant conflict with each other. In fact, they divided the people into two different groups, the Ellingboes and the Krums, and they never send letters to each other.

This situation exasperates the young postman, who won’t be able to complete the task. But, one day, everything changes. By chance, he meets Klaus, an old man, who lives alone on the mountain. In his house, Klaus has a lot of toys he has made with his own hands.

After a series of circumstances, these two characters start working together. They decide to give the toys to children, who send them letters asking for these toys. And, they work during the night, so nobody can see them.

As a consequence, children start playing together, no matter what group they belong to. Thus, this attitude teaches adults a lesson. So, they leave their differences behind and learn to live peacefully together with their neighbors.

Furthermore, by receiving so many letters, Jesper manages to finish his task. In the end, everything has changed. He’s now a better person, who cares about others and tries to make people happy. And, Smeerensburg has become a wonderful place to live.

Klaus: an animated movie with a very important message

The important message that Klaus leaves us is that it’s possible to live peacefully together. People just need to respect each other and talk, in order to solve their problems.

Unfortunately, sometimes, adults teach children antisocial behaviors. As it happens in the movie, they teach kids to hate and reject each other. We shouldn’t let this happen!

“Parents are the ultimate role model for children. Every word, movement and action has an effect. No other person or outside force has a greater influence on the child than the parent.”

Adults, especially parents, are children’s role models. Therefore, we have to be aware of our attitude in front of them. Furthermore, we should pass on to them moral and ethical values, like accepting and respecting diversity.

More lessons from this movie

Moreover, through the different situations the characters experience in the story, the movie teaches us lessons about:

In conclusion, you shouldn’t wait any longer to watch this beautiful movie with your family.

10 Christmas Movies for Children
One of the best options to spend the holidays at home is to see a good movie. There are many Christmas movies for children, like these ones! Read more »
Link copied!
Interesting Articles
Games and cartoons
3 Great Christmas Gifts for Babies

Many babies will enjoy their first Christmas this year. In other words, for the first time, they'll witness this wonderful…

Between the ages of 6 and 12 months, babies start to sit up on their own and develop their motricity…

When little ones play, they learn all about the world around them. Not only is play beneficial when it comes…