Children always love magic, so we're going to show you four easy tricks that you can perform at home! 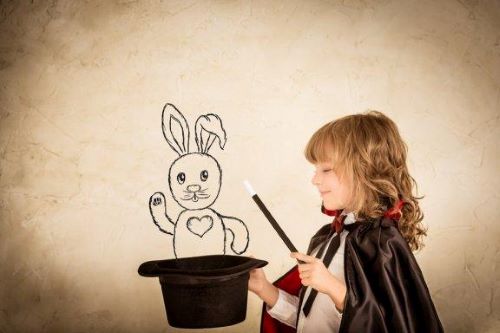 Magic is fascinating to both children and adults, it doesn’t matter how old you are. Whether you just want to surprise your children at home or during some special celebration, we’ll show you an ideal series of magic tricks for children.

Making a coin disappear is one of the simplest magic tricks for children.

For this trick you’ll need the following:

Performing this particular magic trick takes some advanced preparation. After you’ve gathered everything, you first need to prepare the glass you’ll use for this trick.

Take one of the sheets of paper and trace a circle using the opening of the glass. You should then cut the circle out.

Now, there are just two more steps to preparing for this trick. Tape the other sheet of plain white paper to the table and fasten it with the adhesive tape. Then the circle of paper that you cut out earlier should be taped to cover the top of the glass.

Magic tricks for children: Time to start the magic

Once we have everything ready, then we can start performing the trick. Tell the children that you’re going to make the coin disappear. Cover the glass with a handkerchief or a piece of cloth and ask them to say the magic words.

Uncover the glass and the children will think the coin disappeared, but really the paper that is taped to the top of the glass is covering the coin.

2. The balloon that doesn’t burst trick

For this magic trick, you’ll need the following materials:

You should prepare for this trick beforehand by doing the following: Once you’ve inflated all the balloons, you should tape just a little tape on only your balloon. The balloons given out to the children will be without tape so the children can’t figure out the trick.

When performing this trick, distribute the balloons without tape among the children present and give them something sharp that will prick the balloon.

Everyone should try to burst their balloon at the same time. The balloons the children have will burst, but not your balloon. Yours won’t burst as long as you try to prick it where you put the tape.

3. Magic tricks for children: The stealing your nose trick

Although this is a magic trick meant just for very young children, this always makes them smile. You just have to tell them you’re going to steal their little noses and grab theirs for a few seconds.

Then you slip your thumb between your middle and index finger like it’s a little piece of their nose. For a few seconds, the children really do believe their nose has disappeared.

For this magic trick, all you need is a deck that contains 21 cards. To start the trick, pick a child from the audience and let them pick a card. Have him show it to the audience if there are others watching.

Once they’ve picked their card, deal the cards in three stacks facing up, asking the child in which group is his card.

Place the pile with the chosen card between the other two piles and repeat this same dealing action while asking the child to indicate the pile containing his card twice more.

In this way, the card the child chose should be the middle card of whatever stack they identify after the third try.

A big part of successfully performing these tricks with children is to practice them beforehand. For this reason, we suggest that you practice in front of a mirror, not only the trick itself but also the way you stage it (which is essential for magic tricks).

Although you’re performing the tricks for children, keep in mind they’re very intelligent and the children can quickly detect where the “magic” is if you don’t practice.

Inflatable Pools for Families in the Summer
A great way for young children to have fun at home is with inflatable pools. There are lots of different models and options to choose from. Read more »
Link copied!
Interesting Articles
Sports and activities
3 Easy and Fun Crafts for Children