The Stories Written by The Brothers Grimm and Their Impact

Everybody knows the world famous stories that the Brothers Grimm wrote in the early 1800s. But their stories aren't just popular, they also have an important background. How can these stories affect our children? 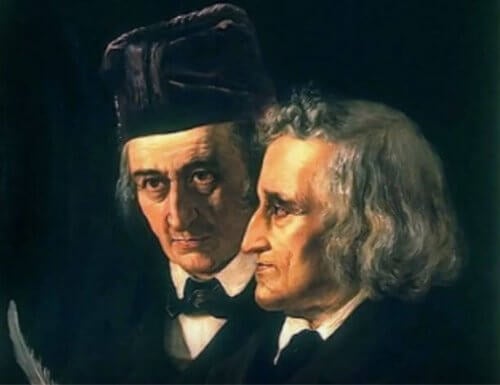 However, the brothers’ initial aim wasn’t to write a collection of literature for such a young audience. The first versions of their stories are extremely crude and anything but child friendly.

The brothers later began a task of “softening” their stories to make them more appropriate for children. Nevertheless, these stories still have a certain effect on young, penetrable minds.

The stories written by the Brothers Grimm: anything but fairytales

Culturally, we’re used to children’s stories with happy endings. The good guys win, the bad guys run away, and everyone lives happily ever after. But as we pointed out above, many popular fairytales didn’t always have the happy endings we know today. Stories written by Perrault, Anderson and the Brothers Grimm were characterized by violence and cruelty.

Although these have their share of morals, they also include very gruesome details. In Hansel and Gretel, the witch is burned to death. In The Little Mermaid, the main character turns into foam and disappears when the prince rejects her. Many believe the purpose was to frighten children so that they would stay away from certain situations and people that could be dangerous.

Adaptations for children: only to a certain point

Some parents are afraid of lying to their children when they tell them fictitious stories. While it’s true that many stories are quite unrealistic, that doesn’t mean they’re going to confuse or mislead children.

Other parents, however, believe that if they remove all reality from children’s stories, their little ones will grow up more happy and protected. However, that’s not completely true either.

“The adaptations that we choose should respect the moral of the story, without forcing the children’s level of sensitivity.”

The key lies in finding balance. Sometimes, we need to modify stories to neutralize certain negative, cruel and violent aspects. However, we can still use these stories, keeping in mind that many of them have important morals. We need to look for appropriate adaptations that don’t take away from their original intent.

We also need to keep in mind that the adaptation should depend on the child. This is the reason why so many adaptations of a particular story exist. It’s not just a question of age and ability to comprehend. It’s about remembering that each person has a different level of sensitivity.

The stories written by the Brothers Grimm: more than mere entertainment

Every story has a double purpose. On the one hand, stories are meant to be a pleasant form of entertainment. But at the same time, they’re meant to communicate important messages and values.

Most stories have a marked moral character, and the ends tend to punish those who act incorrectly and reward those who do what’s right. But beyond this basic double function, the works of the Brothers Grimm have an important representative role.

In a sense, the stories are a means for gradually introducing children to reality. As we’ve mentioned, the purpose behind the gruesome details were aimed at protecting children. By instilling a certain degree of fear, the authors meant to warn children about certain dangers they should avoid.

However, the events in the stories aren’t the only things that reflect reality. The way children relate to each character affects how they relate the stories to reality.

“The stories can have a therapeutic role. Representing disorders in a more friendly way can help children overcome diverse obstacles”

The use of the antagonists in these stories is especially remarkable. Let’s mention, for example, the family step mothers in the Grimm stories. Cinderella, Sleeping Beauty and Snow White were all terrified of these evil women in their lives.

Children use these malevolent characters to understand the way other people act and feel. In this way, they classify their loved ones into those that are good and those that are angry, bad, etc: step mothers.

We also can’t forget to mention the counterpart of the step mothers in these classic tales: the fairy godmothers. These characters care for the main characters, just as beloved family and friends care for children.

Children associate this role will those who protect them from harm. Through fairy godmothers, children understand that their loved ones will always be there to care for and protect them.

Thousands of children around the world have read and enjoyed the world of fantasy and magic in Harry Potter. Without…