Experts need to do more research to discover how breast cancer affects pregnancy. Read on to learn more. 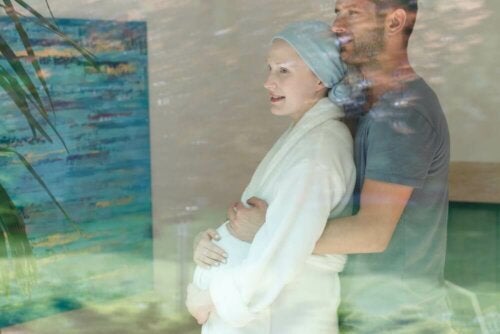 The happiest moment of your life, that of being a mother, can be overshadowed by the presence of a tumor in your body. How breast cancer affects pregnancy and the stage of the disease will be key in the future decisions you must make.

But it isn’t all bad news. In fact, although it’s estimated that 1 in 3,000 women are diagnosed with “gestational breast cancer,” several medical alternatives can slow the progression of the disease without harming the baby.

Firstly, we should analyze how breast cancer develops before seeing if pregnancy is viable in these cases. Tumors are the result of cell clusters that underwent DNA mutations due to various factors, whether genetic or environmental.

This causes said proto-oncogenes to equip the cell with mechanisms to proliferate uncontrollably and, at the same time, induce this capacity in neighboring mammary cells. As a result, this creates a mass of immortal cells that the body doesn’t recognize as foreign.

Depending on the affected genes, there’s a classic classification of breast tumors: luminal, triple-negative, and HER2. The treatment the woman should follow varies depending on the type. Also, the stage the tumor’s in and if the nodes have been affected are going to determine how breast cancer affects pregnancy.

There isn’t a lot of information on the subject since, currently, there are few studies on it. However, both the AECC (Spanish Association Against Cancer) and the American Cancer Society agree that it’s possible to treat the disease without compromising the pregnancy. Although the placental barrier protects the embryo, it’s advisable to wait until the first trimester of pregnancy has passed.

On the other hand, this type of cancer isn’t easy to detect during pregnancy, since changes in the breasts during this period can mask the tumors. A mammography is necessary to detect them and confirm the diagnosis. However, this diagnostic test doesn’t pose a risk to the fetus, since its radiation is low and doesn’t reach other parts of the body.

Also, there’s the option of performing an ultrasound scan, although it’s less revealing. This test is completely harmless for both the mother and the baby, unlike magnetic resonance imaging. Experts rule the latter out because it can cross the placental barrier and cause fetal malformations. And what about treatments if a tumor is detected? Are they safe for pregnancy?

Breast cancer isn’t one of the risk factors that affect pregnancy. Although cancer cells rarely affect the placenta, treatments can. They should be adapted to the type of the tumor, its size, stage, and the age of the fetus, without losing sight of the fact that the most important thing, in these cases, is the mother’s life. But rest assured that most conventional treatments don’t affect the baby.

In most cases, doctors opt for surgery, since anesthesia doesn’t pose a risk to the baby. In addition, if enough time has elapsed from the detection of the tumor until the intervention is scheduled, it’s more likely that you’ll already be in the second trimester of pregnancy. The most common course of action is a radical mastectomy, since radiation therapy isn’t a viable option.

“The entire arsenal against breast cancer can be safely applied during pregnancy, except radiation therapy.”

If chemotherapy is necessary, it’s advisable after the first trimester. Although there are no serious risks to the fetus, the baby may be premature or the doctor may opt to schedule a Caesarean section and induce the labor. On very rare occasions, according to the AECC, there’s “fetal loss.” Nevertheless, they stress that there isn’t enough safety data in this regard due to the limited experience in its use, especially with taxanes.

When you believe there’s no hope

It’s possible that you might consider the possibility of terminating your pregnancy, depending on the stage your cancer is in and your health. In this regard, you should know that this decision hasn’t improved the prognosis in mothers who’ve opted for it. This is a very significant piece of information on how breast cancer affects pregnancy. Thus, you must think about the consequences that the treatment will have on your baby and, if possible, postpone it until after you give birth.

“No language can express the power and beauty and heroism of a mother’s love.”

The Development of Breast Cancer
Knowing about the development of breast cancer is essential when it comes to fighting against this disease and finding the right treatment. Read more »
Link copied!
Interesting Articles
Prenatal care
Different Types of Pregnancies