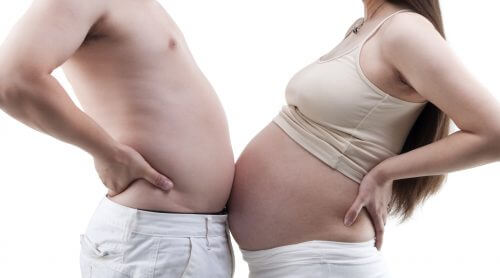 Are you pregnant and the father of your child is nauseated, getting fat and experiencing the strangest cravings at midnight, just like you? Scientists have discovered a syndrome called Couvade Syndrome that affects some first-time parents during gestation and manifests with the appearance of symptoms in men very similar to those of a woman’s pregnancy.

Paternity not only means changing family logistics. Apparently, it also seems to be the case that some men experience certain biological changes in solidarity, albeit unconsciously, with their partners.

Contrary to what was believed until relatively recently, this is not a psychosomatic effect but something genuinely real, since it can cause changes in a man’s testosterone levels, as well as increase levels of prolactin, a hormone that stimulates the production of milk in the mammary glands.

Why is it called Couvade?

Couvade syndrome is named after the French word “couver,” which means to incubate or raise, and it affects some fathers during “the sweet wait.” The syndrome manifests in men with the appearance of typical pregnancy symptoms.

According to different research papers on this subject, this syndrome appears in 10% to 65% of spouses of pregnant women, and it is estimated that 1 in 4 men consult their doctors because of these symptoms.

What are the symptoms of Couvade syndrome?

Men with this syndrome feel the pregnancy of their partner and mimic the typical symptoms of pregnant women. Usually, the effects begin in the first trimester of pregnancy and end when the baby is born.

These are just some of the most common symptoms: nausea, vomiting, mood swings, cravings, weight gain, tiredness, low blood pressure, leg cramps, and even abdominal pain similar to the contractions of a pregnant woman.

Why does it happen?

Some research has been done on the hormonal changes that appear in pregnant women. According to these studies, women emit chemical signals that could be detected imperceptibly by the man.

This would generate a protective attitude toward his partner and simultaneously cause all these symptoms in his body so that in some way he can accompany his wife during this period.

Further research was conducted in which men were given a baby doll wrapped in a blanket with the scent of a newborn. The men held the doll in their arms while listening to a baby cry.

The analysis indicated an increase in prolactin and cortisol, hormones that would generate the symptoms and behaviors of most of the future dads who are already immersed in the world of babies.

How great a wealth it is, even among the poor, to be the son of a good father!

Another theory about this syndrome is based on the idea that the man tries to identify with the pregnant woman. Thus, feelings can arise such as jealousy, fear of the child’s arrival, stress due to the responsibility of having to live with a woman who presents changes of character, and even aversion to sex during pregnancy. This identification with the pregnant woman could generate the symptoms in the father.

Another theory states that this syndrome appears in the most affectionate couples who are emotionally close. And in most cases where this happens, the fathers are often much more engaged in caring for their children, being classified as excellent parents.

What can be done?

Here are some of the most common triggers of Couvade syndrome and some suggestions to help you cope with it better or even eliminate it completely.

The rejection of sex

When the woman rejects sex, it is usually related to the physical changes she experiences during pregnancy.

Take the time to assure her that her body is still desirable and attractive to you at this stage.

In cases where women should abstain from sexual intercourse for medical reasons, they should consult with their specialist about other forms of intimacy or sexuality that are permitted and won’t affect the pregnancy. There are many variants to keep having fun!

If you do not find reasons for Couvade syndrome, it is a good idea to discuss the feelings and fears that pregnancy brings with your partner. This may decrease some of the symptoms so that you can enjoy this time much more.

It is good to know that fathers affected by Couvade syndrome are even more connected to pregnancy and their pregnant wives. They can understand a little better how they feel and better understand their needs.

The good thing about this syndrome is that labor pain is not felt and it disappears when the baby is born… in most cases.