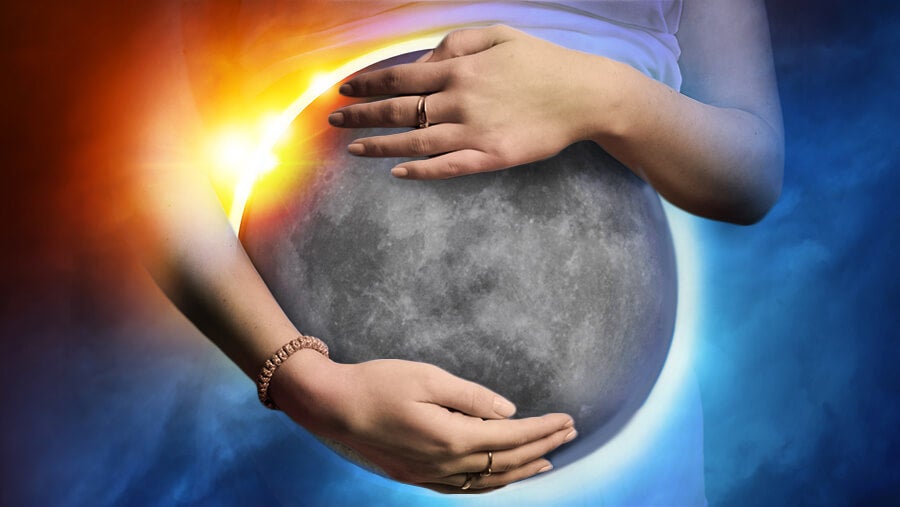 Eclipses are phenomena that have captured human beings’ imagination and curiosity for centuries. Many civilizations’ mythology bases a series of beliefs around eclipses.

Of course, pregnant women are often featured in these beliefs. We will find out more below.

Nature is shrouded in mystery and beauty. The stars, lunar phases, eclipses and many phenomena are related to aspects of human life. And they overlap in many ways.

Even if science doesn’t completely incorporate these beliefs, there are many that have inspired scientific research.

According to popular belief, the moon is considered to have a great influence over elements such as harvests, plant growths, the tides (and thus, fish activities), the behavior of animals, and also fertility.

The moon is also related to elements like balance, health, and luck. For example, since olden times, there has been an established relationship between the menstrual cycle and lunar phases.

In the same way, everything that revolves around fertility and the feminine body is related to natural phenomena.

In the case of eclipses, there is a belief that warns pregnant women from looking directly at an eclipse

It is believed that pregnant women should not look at an eclipse to avoid their baby being born with birth defects, moles, or discolorations on the skin.

While we don’t know exactly where this belief originated, it exists in many cultures around the world. Nowadays, many women decide not to look at an eclipse “just in case” even though they might not believe it.

These are the possible effects that a pregnant woman could experience after an eclipse:

While an eclipse does NOT affect pregnant women as believed, stress and anxiety can cause psychological issues, which could result in psychosomatic consequences in the worst case scenarios.

We need to remember that, in general, pregnant women are much more cautious. In the case of a psychological threat, they could be more vulnerable.

A lunar eclipse is believed to be much more harmful than a solar eclipse. This has to do with the perception that feminine anatomy is governed by the moon.

Eclipses and the human mind

There is a fear that pregnant women may experience possible dangers for their baby due to eclipses.

They are predisposed to experience stressful episodes with a variety of physical consequences. However, none of them include deformities, skin changes or loss of limbs.

No need to worry. This natural phenomenon is not going to affect us if we don’t worry about it.

If we keep in mind that any human could be affected emotionally by a lunar phase, and pregnant women experience it, even more, then hormonal changes are more prone to visible psychological changes.

Specialists have determined that human rhythm can be altered by eclipses or changes in seasons.

There are several changes that may occur during lunar eclipses in people with the following disorders:

On the other hand, science has not been able to correlate anything regarding pregnancy, birth rates, or even criminal activity.

According to Aztec mythology, the moon can intervene in human fertility. Therefore it can affect everything from conception to the embryo development.

According to these beliefs, the disappearance of the moon during pregnancy would cause direct effects on the fetus.

According to the Aztecs, a lunar eclipse caused deformations in recently born children.

All birth defects like blindness, deafness, or muteness were attributed to some astrological phenomenon. On the other hand, it was believed that these problems could be avoided.

Some of the possible ways pregnant women could avoid harm to their baby during an eclipse include the following preventative measures:

One way or another, recommendations for pregnant women during eclipses have endured ages. Although they have no scientific backing, at least they offer peace.

Many mothers do take all of these suggestions seriously, because they think they have more to gain by heeding the cautions.

The orange rhino technique was created in 2012 by an American mother who, after realizing that she was yelling all…