What are the advantages of horizontal positions for giving birth? We'll be taking a look at the 4 most common ones in this article. 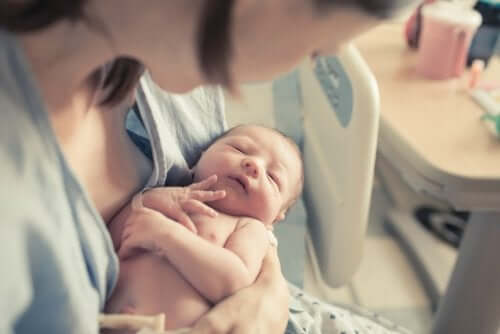 Horizontal positions for giving birth are the most common ones, and they’re the ones most used in our hospitals. We’ll explain the different positions, as well as the advantages and disadvantages of each one.

The birth position is a personal choice for each woman, and they should choose which one they feel most comfortable with. There are either horizontal or vertical positions, although, as we said before, the most popular ones with women are the horizontal ones.

This is the most popular way of giving birth. The mother-to-be will lie down on the bed with her legs bent and supported on the stirrups. Although it’s true that this is the most common position, it’s actually not the best for the natural evolution of childbirth.

In the next section of the article we’ll look at the advantages and disadvantages of this position.

This position has two variants. The mother can be placed on the bed, or directly on the floor. If she chooses the floor, then cushions and other objects will be placed so that she doesn’t feel uncomfortable.

In both cases, the body will be in the same position. The woman will be on all fours, and her weight will rest either on her hands or elbows, using the way that’s simpler and easier for the mother.

In addition, it’s advisable to place the feet and legs further out than her knees so that she can hold her weight better.

This is also known as the left lateral decubitus or SIMS position. In this position, the mother will be lying down, but on her side. One of her legs will be supported on the stirrup, and her knee will be bent in order for her to have the best posture when it comes to pushing.

This is the same position as the left lateral position, but the woman will curl up her body. As she curls up and puts pressure on her abdomen, the pelvis will expand, thus making it easier for the baby to come out.

Advantages and disadvantages of horizontal positions for giving birth

Now that we’ve got to know the four horizontal positions for giving birth, we want to show you the advantages and disadvantages of each of them so you can choose the one that seems best for you.

The fetal position has similar advantages and disadvantages to the left lateral position, because, as we said before, it’s practically the same position.

What Are the Best Positions for Giving Birth?
If you're wondering about the best positions for giving birth, then take a look at these and choose which you think will be the most comfortable. Read more »
Link copied!
Interesting Articles
Preparing for childbirth
Self-Hypnosis in Childbirth: What You Should Know