Obesity during pregnancy can have very important consequences for the health of the mother and fetus. If you're overweight, you must start eating healthy. 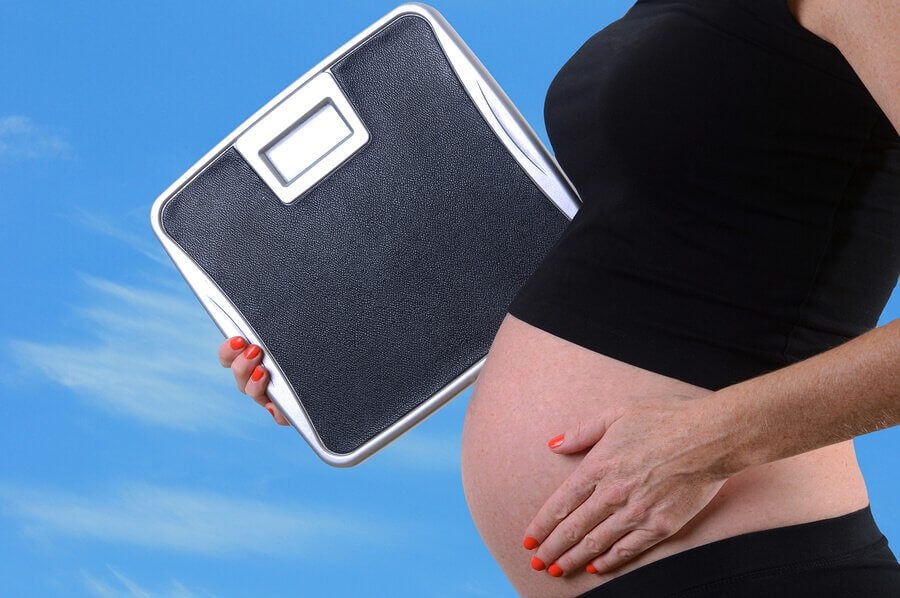 A woman is considered overweight when she has excess body fat and her body mass index (BMI) is greater than 30. Her life and her baby’s could be in danger if she’s pregnant. That’s why it’s important to know how obesity affects pregnancy.

The consequences of obesity during pregnancy are alarming. For the mother, the threats include gestational diabetes and preeclampsia. For the baby, physical defects are possible. In addition, there’s an increased risk of dying in the womb.

If you’ve done tests that indicate that you’re overweight, we’ll give you some tips. They’ll help you prevent and treat this condition.

To talk about how obesity affects pregnancy, first we need to define what it is. We also need to discuss the parameters to define it.

Obesity is considered to be a type of functional disease. However, it’s preventable. In it, excess amounts of fat build up in the body.

According to doctors’ parameters, a person is obese if his or her BMI is equal to or greater than 30 km/m2. For non-pregnant women, it can also be true if their abdomen is greater than or equal to 35 inches.

People with obesity are at risk of suffering from metabolic syndrome. Basically, it involves diseases such as diabetes, heart problems, skin problems, gastrointestinal discomfort, stroke and osteoarthritis. In extreme cases, it can also lead to cancer.

If people suffering from obesity are at risk of developing one or more diseases, what happens to women who are pregnant and overweight? Below we’ll discuss some of the ways that obesity affects pregnancy.

For starters, women with obesity have more difficulty getting pregnant. This is because the excess fat in the body inhibits ovulation. This condition can be so radical that some people even experience failure with in vitro fertilization.

However, if you’re already pregnant, the direct consequences of obesity could be:

“For the mother, the threats of obesity during pregnancy include gestational diabetes and preeclampsia. For the baby, physical defects are possible.”

How does obesity of the mother affect the fetus?

As expected, the mother’s obesity also harms the fetus. The health complications that can affect it are:

How pregnant women with obesity can take care of themselves

If you’re pregnant and are already considerably overweight, you should know that the doctor treating your pregnancy will be responsible for checking your health periodically. In addition, you need to stick to the diet and exercise plan your doctor makes for you.

You’ll also have several tests to check for gestational diabetes. Likewise, you’ll have your ultrasound at the 22nd week instead of the normal 18th week.

This is because the amount of adipose tissue makes it hard to see on the ultrasound. Finally, you’ll have more than one fetal echocardiogram to rule out congenital problems.

As a final recommendation, if you want to get pregnant and struggle with obesity, make sure to take care of yourself.

Eating healthy and exercising regularly will benefit both you and your future baby. Thanks to these habits, you can avoid suffering medical complications.