Can You Get Your Period While Pregnant?

If you're pregnant and experience any kind of vaginal bleeding, you should tell your doctor immediately. There is no way it can be related to your period. Find out more about this problem below. 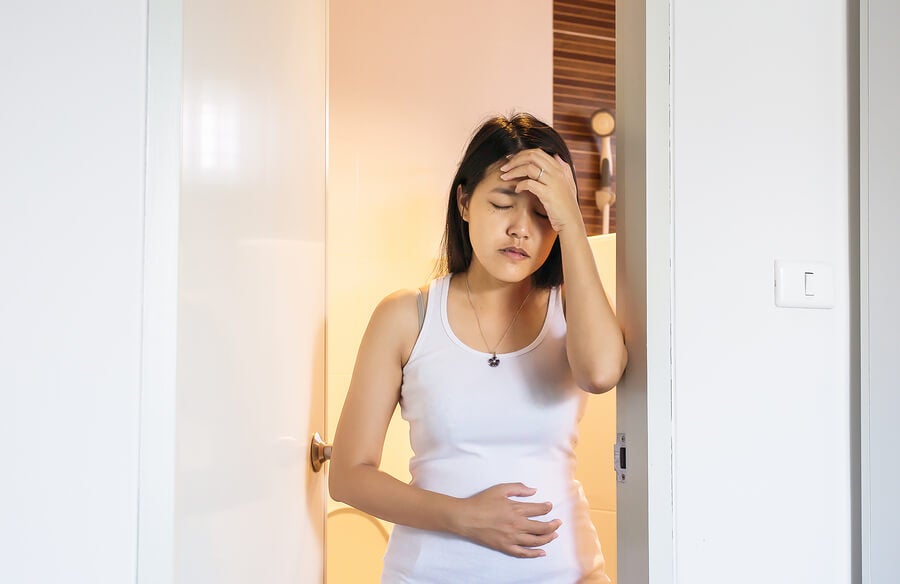 To respond to this question, the first thing you should know is that you can’t get your period while pregnant. However, during the first trimester, some women bleed similarly to menstruation. What should you do when this happens?

Generally, this is known as early pregnancy bleeding. It’s a phenomenon caused by hormonal changes. However, the amount of blood is different from your normal periods.

Additionally, the amount of bleeding can vary from light spotting to consistent vaginal bleeding.

Can You Get Your Period While Pregnant?

Pregnant women can have some irregular bleeding. However, it’s never from your normal menstrual period. Surely, some women may confuse this with their period because it happens around the time they would be menstruating.

Irregular bleeding or spotting that occurs during pregnancy is usually dark brown or light pink. You should also keep in mind that, during this time, you should never be able to fill a pad or tampon.

Causes of Bleeding During Pregnancy

These are some of the things that cause bleeding during pregnancy:

Implantation bleeding occurs when the fertilized egg implants in the uterus. When the egg sticks to the wall, it causes part of the wall to detach. Generally, this type of bleeding is light brown, pink or red.

Sometimes, women have irregular cycles after taking birth control pills. If you recently stopped taking them and are pregnant, it’s possible to suffer intermittent spotting due to hormonal changes.

In addition, getting pregnant right after you stop taking birth control pills makes it hard to tell if you’re bleeding from intermittent bleeding or your regular period.

Sometimes, the fertilized egg implants itself outside of the uterus. This usually happens in the Fallopian tubes or cervix.

When this happens, the cells begin to grow and, as a result, cause pain and bleeding. The blood will probably be red, and could be very painful.

If left untreated, it can hurt your chances of getting pregnant in the future. Therefore, it’s very important to receive medical assistance immediately.

“Bleeding while pregnant doesn’t always mean that the woman won’t have a healthy pregnancy.”

Molar pregnancies happen when the fertilized egg grows abnormally and the placenta becomes a mass of cysts, like a benign tumor. It’s characterized by the abnormal growth of trophoblasts. These are the cells that normally develop in the placenta.

Unfortunately, this could cause the pregnancy to not be successful. This is another situation that requires immediate medical care to prevent damage to your reproductive system.

However, in some cases, this sex hormone doesn’t rise enough to completely stop your cycle, especially in the first few stages of pregnancy. Therefore, you could still bleed a little.

Bleeding could also be an early sign of miscarriage. Like the other causes of bleeding during pregnancy, a miscarriage often starts with light spotting that turns into heavy bleeding.

You should also keep in mind that bleeding while pregnant doesn’t always mean that the woman won’t have a healthy pregnancy or a miscarriage. However, it could be a cause for concern. In any case, if you bleed while pregnant, you should consult your doctor immediately.

Finally, remember that there are many reasons why a woman might bleed during pregnancy. However, it’s impossible to have your period while pregnant. Fortunately, most women don’t experience any type of bleeding during pregnancy.