Nausea and Vomiting During Labor

Throwing up is extremely unpleasant, even more so during childbirth. This problem can be caused by different factors and it requires that pregnant women take care of certain aspects. 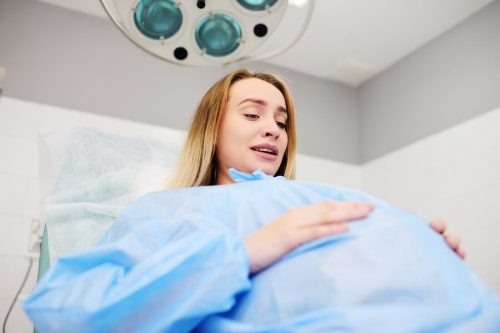 Vomiting during labor is common in some women. In most cases it happens without warning. What should you know about this?

It’s important to know that vomiting during labor is caused by different factors such as hormone changes or even due to vaginal examination during labor. There are many ways to control nausea and vomiting. In this article we’ll tell you more about it.

Studies confirm that throwing up is a very common experience, not only during labor but also throughout the entire pregnancy. In fact, throwing up affects 70-80% of all pregnant women.

Although most women who suffer from nausea and vomiting during pregnancy have few symptoms in the first trimester, a small percentage of them have these symptoms all the way until childbirth.

Often, pregnant women feel exhausted because of vomiting. Physical tiredness and dehydration can have a direct impact on their emotions. Feelings of frustration, the desire to give up, fear and confusion can arise, which affect the way they’re dealing with labor.

If dehydration comes as a result of throwing up, physiologically speaking, the woman’s body will have difficulties to carry on during the whole process. In general, this may cause labor to slow down and even possibly stop, due to ketosis.

And we often hear everyone talk about morning sickness during pregnancy, but no one mentions that nausea and vomiting are also frequently present during childbirth, along with the painful contractions.

Moreover, pain isn’t the only factor that can make you feel sick. Epidural can also induce vomiting during labor if your blood pressure suddenly drops.

Whichever the cause of the vomiting, the most important thing you must do is stay hydrated.

What are the causes of vomiting during labor?

Some women feel hungry and thirsty during labor, especially in the first stages. Eating is especially important during early labor because it provides the energy you need during the active stage.

Besides stress factors, restricting your food intake during labor can cause dehydration and ketosis. This happens when the body starts burning fat in order to get energy from it.

During labor you must make sure to drink your usual water intake or even increase it. Dehydration is probably the main trigger of blood vomiting during pregnancy and labor.

Keep in mind that when your body doesn’t have enough fluids, it will make you feel nauseous.

The lack of fluids creates an excess in pressure, then vomit expels the bile pigments and blood.

“Eating is especially important during early labor because it provides the energy you need during the active stage.”

Some painkillers given during labor and the anesthesia used can both be the causes of vomiting.

Keep in mind that once women receive their doses of medicine or while they’re unconscious, they can’t control their breathing and swallowing. This makes vomiting episodes happen more easily.

4. Some foods and drinks

In some cases, certain foods and drinks can induce vomiting during labor. If this is your case, focus on drinking water instead of juice and foods like soup and bananas.

Additionally, vomiting can reflect hidden fears and worries. When strong emotions are present during labor, it can greatly affect you physically as well. Try to identify and solve your concerns beforehand.

Finally, remember that in order to reduce vomiting, you should eat light foods during the first stages of labor. Then, during the active stage, the best thing to do is to only drink fluids.