Christmas is full of unforgettable moments, gatherings, celebrations, songs, carols, and meals. There are also very creative and fun recipes for children. The following are some good examples. 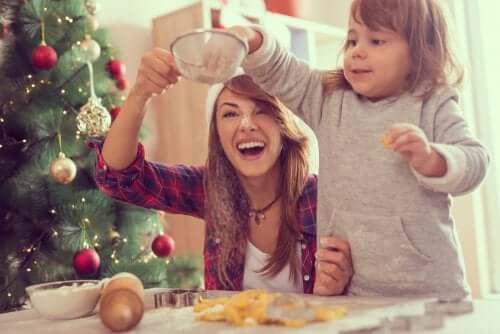 The Christmas holidays are among the most important dates to share with family. Many unforgettable moments take place in which Christmas recipes for children abound. After all, pleasing the little ones in the house is part of the charm of this time of year.

Meals, along with gifts, are usually the main focus of these celebrations. Enjoying grandma’s special preparations also creates Christmas magic. Occasionally, they have secret recipes that have been passed on from generation to generation.

Imagination: the main ingredient of Christmas recipes for children

There are various possibilities; from main dishes to appetizers, canapés, and snacks. Although, almost all the attention is usually centered on desserts. It’s not just because of the kids; adults also can’t resist the sweets that go along with the Christmas spirit.

To prepare these cookies, you’ll need an egg, 300 grams of sugar, and two teaspoons of vanilla. Also, three cups of wheat flour, 150 grams of butter, 225 grams of cream cheese, and the zest of two lemons.

To decorate each homemade cookie according to the occasion, we’ll require red, green, and yellow food coloring. They’ll taste great if you add chocolate chips and colored sprinkles.

The first step is to beat the butter until it takes on a creamy texture. Then, while stirring, slowly add half of the sugar. Once the mixture is compact, add the egg, the lemon zest, and a teaspoon of vanilla.

After that, add the flour little by little, while continuing to whip the mixture the entire time. When the preparation gains volume, you’ll have to start kneading it using your hands until it sticks to the container. Spread the mixture on a flat, previously floured surface and flatten it until it’s approximately half a centimeter thick.

Since this is a Christmas recipe for children, the cookies are cut with molds of figures such as Santa Claus, bells, or stars. Place them on a tray and cover it with paraffin paper in order to bake them for 10 minutes at 350°F (180°C).

To decorate the cookies, beat the cream cheese with a teaspoon of vanilla and the rest of the sugar. To achieve different colors, you must divide this mixture into three portions and place a different dye on each of them.

Once the cookies are cold, cover them with these three layers along with chocolate chips and colored sprinkles. You can let the children decide how to decorate them.

Snowmen made with fruit

When thinking about Christmas recipes for children, snowmen are mandatory characters. In this preparation, these snowmen are made with fruit.

This recipe requires two bananas, a red apple, and strawberries. You’ll also need to chop a large carrot into triangular pieces and get some chocolate chips and sprinkles.

The preparation is extremely fast and simple. Chop the bananas into slices that have a thickness that allows them to be fixed on a stick. As for the apples and strawberries, cut them into triangles. Each snowman consists of three slices.

Apples and strawberries serve as hats. To simulate the nose, use the cut carrots. Finally, make up the eyes and a smile with the chocolate chips and sprinkles.

Mashed potatoes snowmen, one of the best Christmas recipes for children

Not everything has to be sweet or dessert. As an example, here’s another recipe with a snowman as the protagonist. However, this time you’ll make them with mashed potatoes; a very malleable preparation for shaping figures.

They require two tablespoons of butter, a teaspoon of oregano, and 100 grams of Parmesan cheese. You also need half a cup of milk, a pepper, and peas; as well as salt and pepper for taste. As a central ingredient, you’ll need six large potatoes.

Prepare the puree in the traditional way with the exception that you’ll use Parmesan cheese and less milk. The purpose of this is to obtain a much firmer mixture than usual.

When the mixture is cold, place balls of two different sizes on a tray. Distribute them in pairs, setting the smallest over the large ones. To decorate them, use small pieces of carrots along with pepper and peas. For the scarves of each snowman, you’ll add thin strips made of peppers.

5 Ideas for Decorating Your Christmas Table
Deciding how you want to decorate your home for the holidays can be tricky. To help you out, here are five ideas for decorating your Christmas table. Read more »
Link copied!
Interesting Articles
Sweet recipes
Spanish Christmas Sweets to Make with Your Children

If your child has celiac disease, and you don't know what he or she can take with them to eat…