Vigorexia: The Obsession for the Perfect Body

Is it possible to become too obsessed with sports and exercise? Can we become ill by doing so? Find out more in this article. 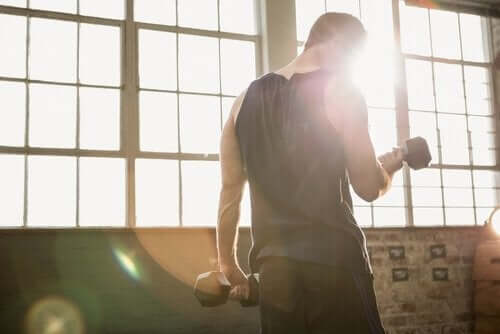 Performing moderate physical activity on a daily basis is a healthy habit. However, when this turns into something of an obsession for the perfect body then it can become a disorder known as “vigorexia” or the “Adonis complex.”

The search for the perfect body

The obsession with sports or the tireless search and obsession for the perfect body through physical activity is known as vigorexia. Although it’s sometimes difficult to detect, it’s quite prevalent in our society, and especially in young people.

We need to look out for the following signs that can put our health at risk:

The health risks aren’t only physical, but also mental.

Also known as “Adonis complex” or “athlete anorexia,” vigorexia is a disorder where people perceive themselves as weak, too thin, and with very little muscle.

In other words, they have a distorted body image of themselves. As a consequence, they exercise excessively and modify their diet drastically. It becomes a type of addiction.

This disorder shares traits with anorexia and obsessive-compulsive disorders (OCD). For example, the fixation to achieve a certain image – the perfect body – and the respective compulsion: to exercise repeatedly.

It’s true that doing sports benefits our health in many different ways, and helps us to become disciplined in our lives. However, when it becomes something that goes beyond a healthy habit and starts to enslave us and make us dependent, then things aren’t good.

It’s not easy to detect vigorexia with the naked eye, as the sufferers tend to look good. However, that doesn’t mean we can’t diagnose it. The name that medical professionals usually give to it is body dysmorphic disorder (BDD).

When a person has this disorder, they feel the need to exercise constantly. They’re never satisfied with themselves and think they aren’t working hard enough to achieve their goals. And, of course, they’ll never actually enjoy the activity they’re taking part in.

How it is caused?

The exact cause of the problem is unknown. However, experts agree that there are several socio-cultural variables that greatly influence its development. Here are the main risk factors:

According to research, vigorexia has a higher incidence in males than in females.

Once the person recognizes that they have a problem, it will be easier to start helping them. However, this first step is one they’ll have to take on their own.

Once they recognize they have a problem then you can work on their lifestyle and the best ways to improve it. Not only should the time they spend exercising be reduced, but their diet should be altered too.

Obviously, the approach must be a multidisciplinary one. It shouldn’t only involve regular psychological attention, but should also be controlled by a nutritionist and a personal trainer.

The main objective is to help the person admit they have a problem and that they should change their lifestyle immediately. Above all, they must learn to eat a balanced diet, which includes all food groups. At the same time, you should eliminate steroids and other substances that are related to performance and gaining muscle mass in a short time.

From a social point of view, the person must be taught not to replace their obligations and responsibilities by carrying out exercise or playing sports. It won’t be an easy task, but it must be done for the sake of the person’s long-term health. Their life may be at risk if they don’t heed advice in this area.

The World Health Organization recommends practicing at least 30 minutes of exercise a day for a healthy life. However, spending several hours a day in the gym is a sign that it has turned into an obsession.

How Does Body Image Influence Adolescents?
Developing a positive body image during adolescence is no easy task. Read today's article to find out how you can help your teen. Read more »
Link copied!
Interesting Articles
Sport and Activities
Alternative Leisure Activities for Young People

Sport and Activities
Escape Rooms and Their Benefits for Children

There has never been a more exciting room than this. Sure, you've probably heard about escape rooms, but now children…