What's body dysmorphic disorder? Did you know that it usually appears during adolescence? Why does this occur? What happens in the case of adults? 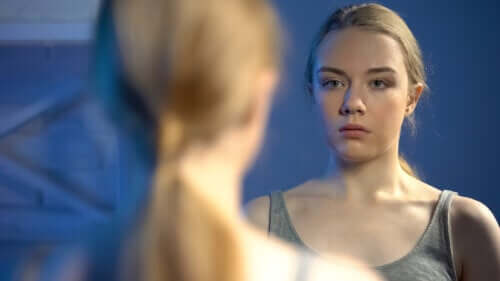 How does body dysmorphic disorder (BDD) appear during adolescence? Firstly, you should know that, according to the DSM-5 (Diagnostic and Statistical Manual of Mental Disorders), BDD is a common and often severe disorder whose core feature is preoccupation with one or more non-existent or slight defects in one’s physical appearance. However, if the person presents actual physical flaws, this preoccupation becomes excessive.

This results in a severe discomfort or deterioration in quality of life. Besides, BDD isn’t the result of any other condition. It’s actually a primary mental disorder. Plus, there are two different subtypes that can be attached (or not) to body dysmorphia:

After this brief introduction, we’ll talk about what type of disorder this is, its symptoms and its psychological treatment. But first, let’s see its general characteristics and the changes it has suffered in the medical reference manuals.

In the past, the DSM-IV-TR considered it a somatoform disorder. However, the DSM-5 specifies that BDD is an obsessive-compulsive disorder (OCD).

In addition to this change of category, the DSM-5 states that people who suffer from this disorder perform repetitive actions or mental acts that are related to their concern about their appearance. And, according to the International Statistical Classification of Diseases and Related Health Problems (ICD-10), this is a hypochondriac disorder.

According to the DSM-5, BDD affects 2.4% of American population and 1.7% of people from other parts of the world. It’s usually chronological, but there’s a treatment and patients may get better. It often comes together with other disorders (comorbidity), such as:

Even if body dysmorphic disorder may appear at any moment in life, it usually happens when teenagers are 16 or 17 years old (2/3 of the patients are younger than 18 years old).

When teenagers suffer from this, they may try to commit suicide. Besides, there are more chances of comorbidity. In addition, symptoms may be progressive. Whereas in the case of adults, symptoms are intense from the beginning.

As mentioned before, in the case of teenagers, symptoms are more progressive. They may start noticing a defect or a part of their body they don’t like. But then, they pay more and more attention to it. At a certain point, they become obsessed and worried about it. Finally, they end up getting a distorted image of themselves.

For both teenagers and adults, the main goal of the treatment is to teach them how to tolerate their discomforts and to eliminate the self-defeating thoughts that come up from the image distortion. Plus, there’s a plan to change the body image of the patient.

A study carried out by Peña-Casquero (2016) revealed the efficiency of cognitive behavioral therapy, which is the most common treatment for teenagers.

On the other hand, it’s well known that teenagers care much more about their body image than adults. This, in a way, defines their self-esteem and self-concept.

As time goes by, the importance of body image reduces. This is why it’s important to work with teenagers on their body image as well. This aims to help them accept their image and feel proud and identified with it.

“You become what you think. You attract what you feel. And, you create what you imagine.”

Rosen et al treatment for body dysmorphic disorder in teenagers include three techniques that have proven to be quite effective:

In fact, two of these techniques (ERP and CR) were part of the previously mentioned cognitive behavioral therapy carried out by Peña-Casquero. More specifically, through ERP, they looked for responses when exposing their patients to certain stimuli (mirrors, etc.), which usually led to reassurance, avoidance and escape behaviors.

“Fall in love with the person in the mirror.”

In conclusion, we could say that body dysmorphic disorder is complex and requires special attention. It usually appears during adolescence. This is probably because of how important body image is for teenagers. Another reason could be the social pressure they suffer to “fit in” or to be “perfect”, and the current influence from social media.

Finally, asking for professional advice is the best way to help people who suffer from this disorder. What’s the main goal? The main goal is that they learn to love their bodies and to receive a realistic and objective image from the mirror.

Adolescence is a period in which people experience many hormonal changes and adopt certain habits. These hormonal alterations cause external…

Healthy habits
The Risks of Skipping Breakfast During Adolescence

Skipping breakfast during adolescence is more common than you might think. Actually, between 16 and 30% of teenagers don't have…

Throughout this article, we'll learn how emotional eating can be managed and which factors cause it. But before that, we'll…

Understanding your teen
How to Help a Teenager with Learning Disabilities