All About Tattoos During Adolescence

Teenagers make many decisions without taking into account their long-term consequences – this is often an act of typical teen rebellion. Today we'll take a look at tattoos during adolescence. 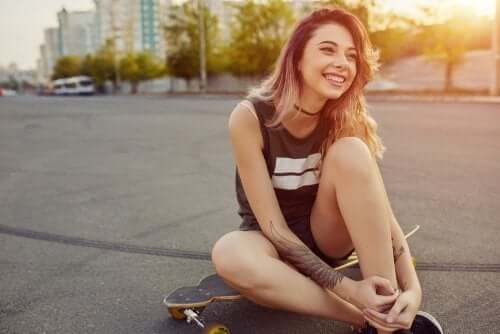 Tattoos during adolescence can be a way for teens to identify and express themselves through images and symbols.

Puberty brings along with it radical changes for each human being. In general, the hardest changes to face are the psychological and social ones. Teenagers aren’t children, but they aren’t adults either. As a result, they experience an unbridled need to find their identity.

That’s why we want to suggest several ideas on how to deal with the ever-growing issue of tattoos during adolescence. For many, tattoos are a permanent form of art on the canvas of our skin. They’re difficult to remove, and attempting to do so without the intervention of a professional specialist can have serious consequences.

Tattoos and adolescence: What’s the motivation?

In most cases, the main motivation behind teenagers getting a tattoo is a matter of identity. Their incessant quest to be different and to carry a mark that sets them apart overcomes them. For many, tattoos represent the opportunity to stand out to the world and manifest their inner selves.

A sense of belonging is another common cause. Wanting to be accepted by a group or teen subculture is enough to drive adolescents to get a tattoo.

Other popular motives that bring teenagers to get tattoos are: Trends among friends and pacts with friends, sweethearts, or family members. Tattoos during adolescents may also represent athletes, musicians, actors, or other personalities that teenagers identify with.

How to handle the issue of tattoos during adolescence

There is a wide variety of opinions when it comes to the issue of tattoos during adolescence. Many parents are against them, while others support them as a form of artistic expression. If you notice that your child is interested in getting tattoos, we recommend sitting down and talking with your teen to analyze the following points:

Tattoos during adolescence: The risks

Adults that like to get tattoos take their time when choosing the best tattoo artist to create lifelong images on their bodies. However, teens are more likely to make quick decisions and turn to artists that fail to meet basic standards of hygiene. This increases the risk of:

Tattoos during adolescence: The most popular symbols

The current trend of displaying popular images on the body is one of the main causes that brings teens to get tattoos. Some of the symbols that are favorites among teens are the following:

Many teens don’t take a lot of time to think before getting a tattoo. During adolescence, most decisions are impulsive. Therefore, as parents, it’s important that we maintain open and honest communication with our children. This will give us the opportunity to discuss with them the pros and cons of body modification.

Body Piercings for Teenagers: Are They Advisable?
For young people, it's very important to look good. In order to achieve that, they often resort to body piercings in an attempt to he fashionable. Read more »
Link copied!
Interesting Articles
Teenage psychology
Consequences of Child Sexual Abuse