Teenage Boredom and Why It May Be a Good Thing

Teenage boredom can be a negative thing at times, but it also has beneficial aspects for personal development. Here's more on this topic. 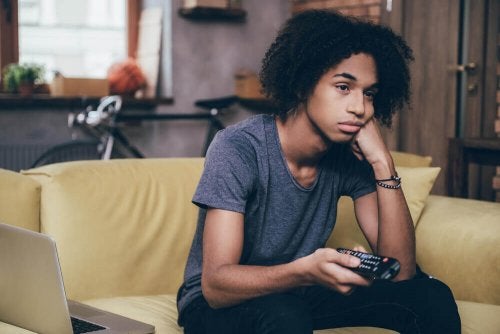 In the age of new technology, teenagers are used to being continuously connected to their electronic devices. This makes them over-stimulated and unaccustomed to spending time doing nothing. That’s why we’ve prepared this article on teenage boredom.

Young people today live in constant movement, and have many opportunities to entertain themselves on a daily basis. This isn’t always a positive thing, although experiencing the sensation of boredom at certain times also has its good side.

There are times when we just don’t know what to do, and this, inevitably, leads to boredom.

Boredom is the feeling you get when you can’t find anything fun or interesting in what you are or aren’t doing. However, we must take into account that when a person performs a pleasant or entertaining activity, they aren’t in their natural state. This is because they’re having to make some form of effort in order to achieve that enjoyment.

So, when we do nothing to pass the time, we can easily get bored, and this isn’t a good situation for a teenager to be in.

During adolescence, teenagers live their lives more intensely and so, when they’re bored, they’ll suffer more than other people. But, contrary to what you’d think, having times of inactivity can actually be very beneficial for personal development.

“Having fun in our world has become not only an individual need, but also a social need.”

Most teenagers today have the following characteristics:

Due to all these characteristics, young people can often despair when they’re feeling excessively bored. As a result, they’ll often try to solve this problem by seeking experiences, activities, and emotions that are stimulating and satisfying, but that don’t require much effort.

Because of this, adolescents who are bored are often at a greater risk of engaging in undesirable and inappropriate behavior. This is a stage of life when young people start consuming drugs and alcohol.

By engaging in these addictive practices, they receive an immediate reward without having to make any real effort. Their boredom disappears, and they start to “enjoy” themselves, but in a totally uncontrolled way.

This is why the family is so important. We should ensure that their teenager has a good example to follow and that the living environment is a good one. In addition, parents need to be aware of all the dangers that surround their child and which could tempt them to get involved in harmful behavior.

“Good habits formed in youth make all the difference.”

The benefits of boredom

Young people don’t always choose to engage in negative actions in order to overcome boredom. Because of that, we could say that getting a little bored during adolescence can be beneficial.

Being bored at certain times in life can help us to develop as human beings, because it implies that we have to actively look for something to distract ourselves.

During this vital time of life when a child starts to become an adult, it’s always a positive thing for them to be forced to think and reflect and look for different ways to entertain themselves. This will awaken their creativity.

Therefore, we can say that boredom is very much linked to creativity. In addition to this, it also helps to develop motivation, autonomy and the resistance to frustration.

In short, adolescents need to have some unstructured free time. It may sound strange, but this will help them take the initiative of deciding what they’re going to do in order to avoid becoming bored!

So, don’t be scared of exposing your child to situations in which they may experience boredom, as this may lead them to think for themselves and be creative.

Alike: A Short Film About the Importance of Creativity
Alike is a short film that allows us to reflect on the importance of creativity in children's upbringing and our important role as parents and educators. Read more »
Link copied!
Interesting Articles
Teenage psychology
Adolescents Want Affection, Not Explanations