The Effects of Cannabis on Adolescents

Cannabis can have very negative effects on brain development in adolescents. We'll tell you everything you need to know in the following article. 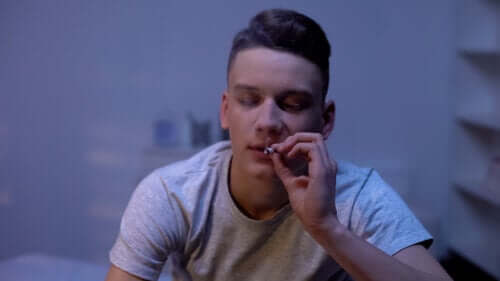 Many teenagers smoke marijuana without considering the effects of cannabis on their developing brain, both in the short and long term. That’s why it’s important that parents warn their children about the dangers of using this drug. In short, marijuana is the worst enemy for the adolescent brain.

A study published in the American Journal of Psychiatry shows that the effects of cannabis have a more negative impact on the cognitive development of adolescents than alcohol. This is a warning signal to teenagers that regular marijuana use, for example, may have lasting effects on their brains.

Study on the effect of cannabis on adolescents

The original purpose of the study was to assess the impact of alcohol on the cognitive development of adolescents. A decade ago, we understood a great deal about alcohol, but very little about cannabis. However, since then, studies have led us to understand much more about cannabis and it’s important to reveal the results.

We all know that alcohol has a negative impact on the brain of adolescents. However, the negative effects of cannabis on cognitive development are also notable. In this sense, it’s important to know all the data to be alert.

The study adopted a “macro-data” approach, observing 3,826 adolescents in seventh grade in 31 schools in the Montreal area over four years. The participants reported each year on their alcohol consumption, and also on their marijuana consumption.

The researchers gave them tests to measure working memory, perceptual reasoning, and inhibition. Neither parents nor teachers could know the results or data, so the researchers guaranteed 100% confidentiality to safeguard anonymity.

The adolescents in the study who consumed cannabis often had more pronounced cognitive effects than those who consumed only alcohol. This should be a warning to those young people who use marijuana or cannabis from an early age.

It’s necessary for adolescents to avoid cannabis use altogether to avoid short-term and long-term consequences on brain development. There are clear health risks that have a direct relationship with cannabis use.

As you well know, smoking cannabis is harmful to health. However, there are some consequences that are very important to take into account. This way, you can tell your teenager what they are so that they can make the best decisions and stay away from this type of drug.

So, the effects of cannabis involve the following risks:

In addition to all of the above consequences, it also increases the risk of heart attack, problems with infant growth during and after pregnancy, and the development of cannabinoid hyperemesis syndrome (CHS), characterized by cycles of severe nausea, vomiting, and dehydration, which may require emergency medical attention.

Do you think your child uses cannabis?

If you think your child is using cannabis, you should seek professional help. Treatment plans should be customized to address the unique patterns of abuse of the adolescent and any related medical, psychiatric, and social problems.

People with marijuana use disorders, especially adolescents, often suffer from other mental health problems as well. It’s more effective to address this dual diagnosis with an integrated intervention, which allows a person to be treated for both their mental illness and substance abuse at the same time.

Treatment will likely include cognitive-behavioral therapy, an important tool that identifies and changes your teen’s attitudes and behaviors related to substance abuse and other co-occurring problems.

Childhood Schizophrenia: Symptoms, Causes and Treatment
Childhood schizophrenia is a serious disorder. Although it's not very common, it must be detected early to prevent further consequences. Read more »
Link copied!
Interesting Articles
Teen behavior
Talking to Your Daughter About Bad Sexual Conduct

Adolescence is a complex stage in life that involves all sorts of major changes. Physical, intellectual, social and emotional development…