It's often thought that permissiveness leads to raising a rebellious teenager. However, the more authoritarian and restrictive the parenting is, the more the adolescents will feel the need to rebel and oppose their families. 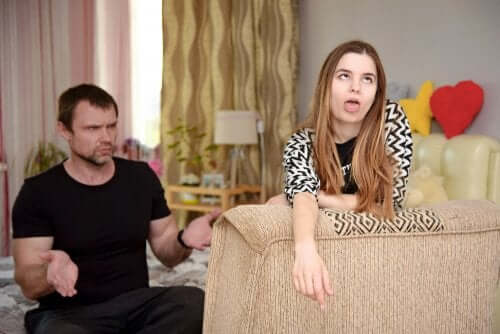 Our childhood and our relationship with our parents marks our personality for life. Despite believing that they’re doing the right thing, overly restrictive parents can cause their children to become rebellious.

There are different parenting styles that vary according to the degree of demand and affection. The authoritarian style that restrictive parents set in motion involves high levels of demand, control, and discipline. There’s a low presence of affection and emotional expression.

These parents use discipline, punishment, and threat as the usual method of education. They severely punish the inappropriate behaviors of their children without giving an explanation of the reason. They focus on extinguishing this incorrect behavior and believe that dialogue isn’t necessary; only obedience matters.

Additionally, they usually impose their rules without discussion. They don’t allow their children to express themselves and aren’t open to negotiation. They repress and restrict the individual freedom of their kids and belittle their interests and needs.

In this authoritarian style of upbringing, parents demand obedience and respect; they exercise excessive control, seeking to achieve good behavior in their children. However, without knowing it, they may be raising repressed young people who will consider rebellion as the only way to respond.

It’s always been thought that permissiveness is the real cause that leads to raising rebellious children. Undoubtedly, this is true. Although, the influence of authoritarianism is just as important even though it’s not a popular belief.

We often believe that parents who educate with a firm hand raise children who behave properly. Nonetheless, it’s common for these kids to take two different, but equally unhealthy paths. Some end up becoming shy young people who lack self-esteem. Others turn to rebellion as an escape valve to defend themselves against this unfair situation.

Let’s keep in mind that all human beings have the desire and need to develop their individuality and to express it. Since we were little, we all yearn to be heard and recognized by our elders, and we enjoy deciding small things like what to wear every day.

It’s every parent’s duty to grant their children a safe environment where they can discover and develop their personality. A place where they can bring out their own essence.

When parents are very restrictive, children find no place for their voice. These parents don’t talk with their children, don’t listen to them, or take time to meet them. They only want blind obedience.

This creates a family environment full of stress and lack of affection that leads to great unhappiness. Those children who’ve been silenced all their lives will fight in their adolescence to make themselves heard.

Adolescence is the quintessential stage of rebellion. All young people tend to challenge authority and break the rules. They don’t do it to annoy their parents, they’re simply individuals who are seeking and developing their own identity.

In a family environment with healthy and affectionate bonds, teenagers will go through these years without much difficulty, knowing that they’re respected and supported by their parents. They’ll be able to negotiate, trust, and respect their parents’ criteria.

On the other hand, restrictive parents that create an unjust environment of imposition will generate, in their children, a need to rebel in order to keep their integrity alive.

During adolescence, the rebellious burst of these youngsters and their firm opposition to their parents can bring about serious problems. Some may turn to tobacco, alcohol, or drugs as a personal rebellion. Others may exceed themselves, get out of control, and be totally irresponsible and aggressive when their parents aren’t present.

This means that if we want to avoid that situation, we must strive to raise our children with clear and coherent limits while ensuring that affection and support also predominate. We must be able to listen, respect, and give space to our children for them to grow into independent individuals.

Our goal must be to ensure that respect and obedience come from their conviction to values they internalize and never out of fear of their parents or punishment. Teenagers whose parents have found the balance between setting limits and letting them experiment, won’t feel the need to rebel in their adolescence.

5 Signs of Teenage Rebellion and How to Respond
When our children show the first signs of teenage rebellion, we often confuse them, or miss them altogether. Find out more about this topic here. Read more »
Link copied!
Interesting Articles
Teenage illnesses
Teenagers that Watch Pornography