When Should You Cut the Umbilical Cord After Birth?

Waiting before cutting the umbilical cord could be beneficial for babies. These few moments mean extra blood supply and also iron and haemoglobin. But how long should we wait? 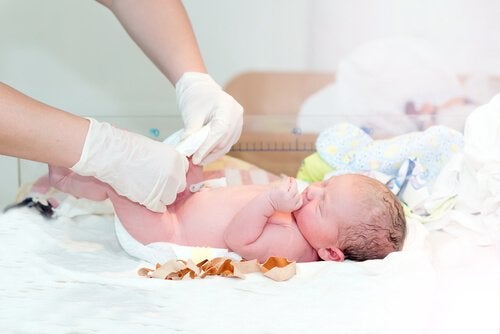 During childbirth, it’s common to cut the umbilical cord immediately after delivery. Up until a few years ago, this was always the case. Now, however, things have changed.

A number of studies have concluded that it’s best to wait a few minutes or even until it stops beating before cutting it. But why? We’ll take a look at the reasons below.

What is the umbilical cord?

During pregnancy, the baby is attached to the placenta by the umbilical cord. The cord is made up of two arteries and a vein which are protected by a whitish tissue.

The blood vessels have a particular spiral shape. Their job is to provide oxygen and nutrients to the baby for it to survive in the womb.

At nine months pregnant, the cord should measure between 20 and 24 inches long and just less than an inch in diameter. If it’s any longer, it could obstruct the birth canal.

If the cord is shorter, then this will also prevent the baby from leaving the womb and can cause fetal distress. In either case, a cesarean is required.

The blood in the umbilical cord contains stem cells which regenerate blood cells. As a result, in some hospitals, it’s extracted and frozen to be used later in treating blood diseases.

Once the child is born, the cord continues to beat for a few minutes. The most common thing was for the cord to be cut so that the baby begins to breathe on his own.

Recently, however, it’s been discovered that it could be better to allow the cord to stop beating or at least wait a few minutes before making the cut.

Why wait to cut the umbilical cord?

The reason that obstetricians used to cut the cord immediately after birth was to prevent jaundice and stop the mother from suffering postpartum hemorrhage.

The extra blood that is provided during the few minutes after birth causes an increase in the baby’s red blood cells. Their pigment is deposited in the skin and causes the typical yellow color.

This means that waiting to cut the cord is actually beneficial for the baby. That extra blood supply also means an increase in iron and hemoglobin which are stored in the body.

This helps avoid anaemia during the first year of life at least. It’s also been observed that rates of postpartum hemorrhage don’t significantly increase if there is a wait.

Although those babies now have a slight yellow pigmentation, the actual risk of jaundice doesn’t increase. Waiting to cut the umbilical cord also doesn’t affect the results of the Apgar test which is performed five minutes after birth.

However, if the mother has been sedated during childbirth, the umbilical cord should be cut immediately. This way, the medication doesn’t continue to pass to the baby.

How long to wait?

The recommended length of time is two to three minutes after birth. This way, the baby receives an extra 100 ml of blood. This means higher amounts of iron and hemoglobin, and these levels are maintained until at least six months of age.

After this period of time, the cord gradually stops beating, which leads to a greater risk of jaundice. Therefore, the cord should be cut before it stops completely, normally five minutes after birth.

That extra blood supply also means an increase in iron and haemoglobin which are stored in the body.

To make the cut, the obstetrician applies a clamp just under an inch away from the baby’s navel and another one about two inches away. The cut is made between them.

The remaining piece is clamped and bandaged up until it dries and falls off, normally seven days after birth. In some hospitals, the father is allowed to make the cut.

However, cutting the umbilical cord should always involve an obstetrician since they know exactly what to do. If you want to wait before the cut is made, you should make sure that this is written on the mother’s medical notes.

Umbilical Cord Problems: Facts to Consider
Learn about the most common umbilical cord problems in this article, as well as its causes and treatments. Keep reading to find out more. Read more »
Link copied!
Interesting Articles
Breastfeeding and baby formula
What Should Moms Eat While Breastfeeding?