Emotional Development from 6 Months to 1 Year of Age

Emotional development is fundamental to a baby's healthy growth and development. Would you like to know how it evolves from 6 months to the first year of life? Find out below! 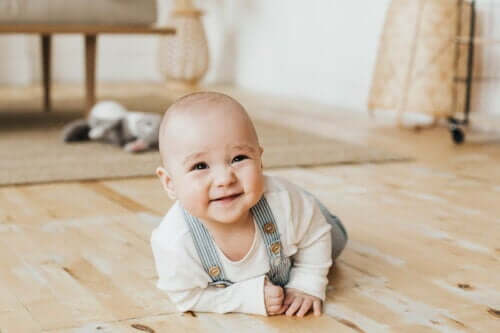 Emotional development begins at birth and progressively evolves as babies grow and relate to the world. Thus, the first emotional bonds that children establish will determine the way in which they’ll express and interpret their own, and other people’s, emotions.

During the first months of life, babies are able to express basic emotions, such as pleasure and displeasure. From the age of 6 months onwards, they begin to feel increasingly complex emotions. This is when you’ll be able to appreciate the most significant changes in your child’s emotional development.

Below, we’ll tell you about the different phases they go through from six months to one year of age.

“All our lives began with human affection as our first support. Children who grow up surrounded by affection smile more and are kinder. Generally, they are more balanced.”

You have to take into account that each child is different and evolves at his or her own pace. However, when we talk about emotional development, we can mention several phases that children usually go through at certain ages.

We’re now going to describe each of the emotional stages that babies go through from 6 to 12 months.

Emotional development from 6 to 7 months

Between 6 and 7 months, babies begin to form the attachment system and show a preference for familiar people, especially primary caregivers, and a rejection of those they consider strangers.

This is when they begin to react with fear, tension and also anxiety to the unknown or in situations where they have to spend some time separated from their attachment figures (mothers, fathers, etc).

From about 8 months, children show a clear intent to communicate. They need to relate to other people and feel involved in the social world around them.

This helps them develop the ability to identify, interpret and even respond to other people’s expressions and emotions, especially in those who are most familiar to them. In this way, they’ll regulate their reactions and behavior according to what these transmit to them in any given situation.

In addition, between 9 and 10 months they’re already able to easily express joy, displeasure, anger and rage.

From 10 to 12 months of age, one can observe how children regulate and express their feelings better. Babies become more aware of their emotions and express them through gestures, attitudes, visual contact and different tones of voice. Some children, at one year of age, are even able to express in words some of the emotional states they’re experiencing.

In this way, babies are able to make themselves heard in their surroundings, and establish richer and more intense communicative and emotional relationships with the people around them.

From birth, babies have the need to create bonds of affection that allow them to safely explore their physical and social environment. This helps them to gradually, yet fully, develop their emotional intelligence.

As stated by the American psychologist, journalist and writer Daniel Goleman:

“Emotional intelligence begins to develop in the early years. All the exchanges that young children have with their parents, teachers and other people carry emotional messages.”

Therefore, mothers, fathers or other adults who act as primary caregivers for infants should strive to establish enriching and stimulating communication with them in a climate that promotes love and mutual respect.

In short, working on emotions from the first months of a baby’s life is very important for a full and balanced development.

Emotional Therapy for Children
Emotional therapy can help children deal with overwhelming and intense emotions so they can understand and manage their internal states.  Read more »
Link copied!
Interesting Articles
Tips for raising your child
The Role of Parents in Child Psychotherapy