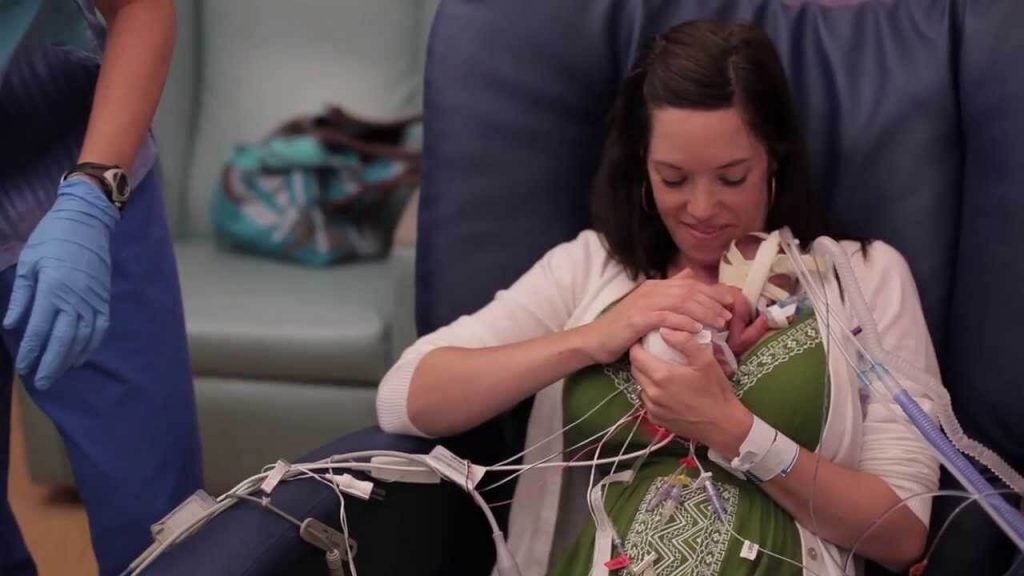 This video captures one of the many touching stories about premature babies around the world. Seeing Lyndsey, Ward Miles Miller’s mom, hugging her baby covered in wires and connections left me feeling shaken.

The first few minutes of the video that took social media by storm seemed painful and beautiful at the same time. She was able to hug her son, who was born 15 weeks earlier than expected, with the help of at least two nurses who held some of the tubes and cables that connected the tiny newborn’s body to devices that help him cling to life.

At first, Lyndsey’s face looks worried, but it also – and I don’t even know how to explain this because it is more than an expression – conveys love and tenderness. In a scene when she arrives at home, she says that she is thinking of her son, and that she always is.

She loves him and never loses faith in God, and never stops believing that he will be saved, against all odds and adversity. And he is. “He’s a fighter,” she says at some point.

The video, called “Ward Miles – First Year” and recorded by his father Benjamin Scot, professional photographer, is a love story that condenses 107 days of hospitalization into six minutes.

A Video About Love

“The video summarizes my son’s first year. He was born very prematurely and had to overcome many great obstacles, but none were greater than God. This is a story of a mother’s love for her baby,” Benjamin wrote.

This beautiful video demonstrates the unconditional love of a mother who never loses faith, who talks to her baby every day and shows him tenderness, even though she knows he is facing difficult situations for how small he is.

The chances that Ward Miles Miller would survive were scarce, as they are for many premature babies in the world, but they are also in the care of many who never stop believing in them.

The caption of one of the photos that Benjamin Scot posted on his Instagram says something like: Today is a big day for him, they will put an IPCC line in him that extends from a vein in his arm or leg all the way to his heart.

It’s a delicate procedure, but it will be a big step forward for him. Please continue to pray for my new best friend.

The images also give an account of the constant struggle of premature babies inside an incubator. “I want to thank doctors, nurses, and staff all over the world who make it their mission to help these babies get better. It is thanks to you that my son had the opportunity to come home!” added Benjamin.

“Ward Miles – First Year” is a viral video, but it’s not the only story about such a beautiful fight. I know there are hundreds of moms in the world who have amazing stories to tell.

Last year, I interviewed Elba Herrera de Encinas. She is the mother of Jorge Andrés Encinas, who was born five months early, weighing 500 grams, and who the doctors taking care of him did not believe would survive. But he did.

“The nurses said to me: he kind of doesn’t seem up to the challenge.” These words meant they believed the baby would not survive. Elba never took any notice of them.

Both Ward and Jorge were born earlier than they were due; their organs had not matured, but in addition to the latest technological advances, both mothers dedicated themselves to loving to their children.

Both spoke to their babies in the incubator, their faith was never broken even though the prognoses seemed discouraging. They both were convinced that their love and God’s help would save their children.

After 14 respiratory arrests, months of hospitalization in the intensive care unit of the pediatric hospital, surgical interventions, emergency transfers to other hospitals for cardiac arrests… sleepless nights, the parents’ financial sacrifices, and years of therapy, Jorge Andrés not only survived: He is now a healthy and talented 9-year-old child, Elba Herrera tells us.

Hers was a multiple pregnancy in which the babies began break down at five months due to blood pressure problems, chronic tension and pre-eclamsia, so she underwent a therapeutic abortion which saved one half-kilo baby, weighing 500 grams and later 400 grams.

“Everything that has happened with Jorge should serve some purpose. We began to work on this, and to share our experience because it is the work of God, and there is value in the work done by parents, family, teachers and other people who are around our premature baby,” says Herrera, who has also seen the video of Ward Miles.