What to Do if Babies Hit Their Head

When your children are still babies, falls and head injuries are common. Remember that they can be very delicate because your baby's head is still forming. In this article, discover what to do when babies hit their head. 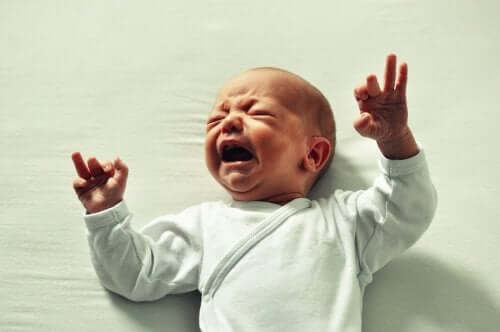 It’s common for babies and children to hit their head. The younger they are when babies hit their head, the more delicate the injury is. Surely you’ve asked yourself what to do if this were to happen to your little one.

Doctors say that babies’ heads stop forming between 8 and 19 months. This is the period of time where the top of their head, where the skull bones haven’t yet closed, seals off.

However, although there are risks, it’s common for children to hit this area. The main cause of these injuries tends to be their lack of body control. To help you out, below we’ll explain how you must act when faced with this situation.

How to determine if a head injury is serious

The fact that your baby’s head hasn’t yet closed doesn’t mean it’s unprotected. This is something you must understand. You have to determine what’s considered a risk factor.

A serious blow to the skull involves brain or skull damage. In this regard, certainly the most vulnerable are young children under the age of one.

However, not every impact causes serious damage. In fact, brain trauma in children or infants is almost always caused by caregiver neglect. What usually happens when babies hit their head is a bruise or a bump.

As a parent, you probably worry about how hard your baby cries after he hits his head. However, probably one of the best symptoms is crying, as it proves that your baby is breathing.

Crying makes you infer that the blow didn’t make him lose consciousness. In turn, this is a symptom that there may be no skull or brain damage. But this doesn’t mean that you shouldn’t pay attention and monitor your baby’s developments after he hit his head.

Is it true that babies shouldn’t sleep after hitting their head?

There’s some truth behind this post-head trauma ancestral practice. Medically speaking, the problem isn’t sleep per se. Instead, it’s important for your baby to shows signs of consciousness.

Thus, although you can let your baby sleep during the first few hours, you have to wake him up every so often. The idea isn’t that your baby shouldn’t sleep but that he show you that he’s conscious and aware every time he reawakens.

It’s a kind of test. During those periods, you have to see if your baby’s behavior is normal or erratic. Wait a reasonable period of time to rule out vomiting, dizziness, or seizures.

What to do exactly if babies hit their head

You should start carefully tending to your baby right from the time of the injury. The right thing is to hold your baby’s head as upright as possible. Pick your baby up carefully, avoiding sudden neck movements. Then, lay him on a surface and avoid shaking him because you don’t know if he’s injured or not. Meanwhile, you can calm him down and inspect the affected area.

For the next 48 hours, check that there are no typical symptoms of brain damage. These symptoms are vomiting, notorious disorientation, seizures, fainting, or nose or eye bleeding.

When to go to the doctor

In principle, you should take your baby to the emergency room if you notice any of the above symptoms. In these cases, the baby or child’s age doesn’t matter.

If your baby has a disease or condition associated with brain function, you have to take him to a pediatrician. The same goes for children with cranial deformations or conditions. Of course, you should also see a specialist if your baby or child has a large cut or bruise.

What to Do if My Child Hits Their Head Hard?
When a child hits their head after falling, they may shed some tears and then after caresses, kisses and pampering, forget what happened to them. Read more »
Link copied!
Interesting Articles
Postpartum
Postpartum Anxiety During the First Months of Your Baby's Life