The Development of Affectivity in Children

In today's article, we'll be talking about the importance of the development of affectivity in order to express one's emotions. We'll also take a look at the different developmental areas that come into play in a person's growth, influencing one another and interacting continuously. 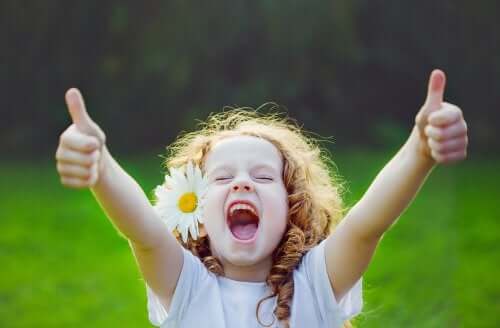 The development of affectivity involves a very complex process in which individuals come to progressively acquire the capacity to experience and manifest their emotions.

In order for the process to take place, children need to be in contact with others. In other words, their social and affective development are inextricably connected and intertwined.

Affectivity develops over the course of a person’s life. However, we can say that both childhood and adolescence are crucial stages when it comes to learning to recognize and manage one’s emotions and feelings.

The development of affectivity

We can consider the development of affectivity to be the path through which people establish feelings, and a way to experience and understand them.

Affectivity encompasses feelings and emotions. It refers to the varied and multiple emotional states – both pleasant and unpleasant – that we go through over the course of our lives.

Furthermore, the characteristic that the path of affective development adopts will determine, to a certain degree, the type of interpersonal bonds that people establish. In the same way, it influences the way a person relates to others.

The development of affectivity involves the ability to experience and manifest emotional states through external behaviors. These behaviors allow people to be part of the social sphere. And, at the same time, they allow them to satisfy their basic physiological, cognitive, social and affective needs.

Important stages in the development of affectivity

The stage of childhood is a basic pillar in the development of affectivity. From the time we’re very small, we experience the need to feel loved, cared for and valued. In fact, the development of our affective personality depends on these factors. It also depends on proper evolution in other developmental areas, including psychosocial, cognitive and motor development.

An important factor in the future emotional life of human beings is the type of bonds or attachments they develop during early childhood. The idea of attachment, developed by John Bowlby (1986), is defined by the set of feelings associated with the people an individual lives and interacts with. These are feelings that influence the individual, providing security, wellbeing and pleasure, produced by closeness and contact.

Attachment is an affective bond that forms over the course of the first year of life. It’s the result of the need for affective bonding that children feel and the behavior that comes into play in satisfying that need. The attachment that children have with their parents and siblings will last a lifetime. What’s more, it serves as a model for how they relate to other children and adults.

Therefore, an affective bond that is calm and stable is fundamental for children. Only then can children develop a positive mental model and secure and socially adapted behavior. This has an impact on their psychomotor development during their first years of life, and their representational development later on.

Adolescence is another very important stage in affective development and the forming of one’s personality. Social interactions and exchanges broaden extraordinarily. At the same time, family becomes less of a reference point, as do the attachment figures of childhood.

At the same time that children are becoming more independent from their families, friends become more important. Teens establish stronger bonds with their peers and often have their first romantic relationships.

The development of affectivity during adolescence has to do with various needs. Adolescents have a need for intimacy in order to internalize and adjust psychologically and biologically to the changes they experience in their bodies.

Teens also experience a need for freedom and independence from their families. This is important in order to advance in their autonomy, essential in their transition into adult life. And, what’s more, youth feel the need to construct their own personality and identity.

This personality and identity will be the product of their preferences, choices (social, sexual, vocational, professional) and how they view their future.

Theories that explain the development of affectivity

There are several theories that explain the development of affectivity, such as Erik Erikson’s 8 stages of psychosocial development. This German American developmental psychologist and psychoanalyst considered affective development to be constant. According to Erikson, it continues throughout a person’s life, and consists of 8 phases.

In each one of these developmental stages, individuals must perform a specific task in order to acquire a series of abilities. This happens because a psychosocial “conflict” occurs that the individual must overcome in order to advance in the development of his or her affective capacities.

Each of Erikson’s so-called “conflicts” is represented by a pair of opposing terms, referring to the positive or negative resolution of the conflict. For example, autonomy vs. shame and doubts, and identity vs. role confusion.

At the same time, Henri Wallon, from the same school of thought as Piaget, has his own theory regarding the development of affectivity. According to Wallon:

How to maximize a person’s affective development

In order for a person’s affective development to be satisfactory, we must maximize the following in both children and adults:

Link copied!
Interesting Articles
7 to 12 Years
The 7-Year-Old Crisis: What Does It Involve?

Between the ages of 2 and 3, our little ones go from being babies to becoming children. Because of this,…

Between the ages of 10 and 12, children go from childhood to puberty. That is, they grow up and start…

Covering basic needs in a child's education is absolutely essential for their proper development. Basic educational needs, as the name…