The Health Benefits of Nuts for Children

Do you know all the benefits of nuts for children? In this article, we'll tell you everything you need to know. 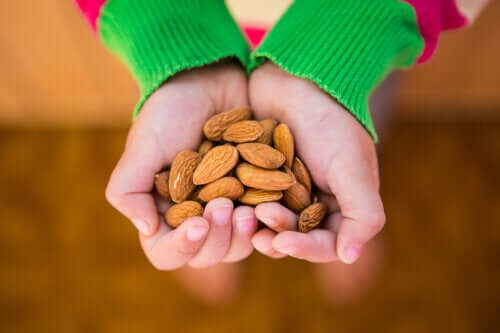 Did you know that nuts are very healthy for your children? They’re high in energy, and they’re good sources of healthy fats, fiber, vitamins and antioxidant minerals. Therefore, they’re perfect for their health and academic performance. Nevertheless, children don’t usually have them. This is why we’d like to teach you the benefits of nuts, so you start including them in your children’s diet.

According to the Spanish Pediatrics Association, you should grind the nuts before giving them to children under 3 years old. This is a way of preventing your child from choking. Another thing to take into account is that nuts could be raw or cooked, but they shouldn’t be fried, and no salt or honey should be added to them.

Next, we’ll talk about the benefits of having a handful of nuts everyday (15-20 grams). We’ll explain how good it is for the metabolic, cardiovascular and brain health of children.

Cardiovascular disease risk reduction, one of the most important benefits of nuts for children

Do you know what illnesses have the highest death rate? The ones related to the heart. And, in order to prevent them, it’s important to follow certain diets. Evidence has proven that nuts are key elements in the prevention of these illnesses, because of the amount of monounsaturated and polyunsaturated acids present in them.

Both types of fats reduce the levels of LDL cholesterol, triglycerides and lipid oxidation. They also increase HDL levels. Phenols, which act as antioxidants, and Omega-3 fatty acid are the ones responsible for this effect.

Replacing unhealthy snacks with nuts is good for cases of being overweight or obesity. In addition, they’re also good in cases of subclinical atherosclerosis. Nuts have blood thinner characteristics, which help in fighting early vascular lesions. In fact, the help control blood pressure, reducing metabolic syndrome.

Furthermore, even though they’re a high energy density food, they’re not responsible for weight gain or abdominal growth. Nuts contain between 160 and 180 kilocalories per 100 grams. However, they’re not fully absorbed, because of the energy spent in metabolizing.

What’s more, they’re quite satisfying due to the high amounts of fiber in them, which keeps you full for several hours. They also reduce constipation and the risk of colorectal cancer.

Benefits in academic performance and the immune system

Since 60% of the brain is fat, consuming nuts relates to improving brain functions. This is why it’s important to include healthy high-fat foods like nuts in children’s daily diets, because they reduce the cognitive deterioration that comes with aging. And, they’re also good for learning skills, memory and cognitive speed.

In the case of the immune system, they contain vitamin E, selenium and magnesium, which contribute to fighting against bacterial and viral infections, and external agents, like the cold weather.

Why are benefits of nuts produced in children?

Bacteria from the intestine ferment polyphenols and fiber. So, they act as prebiotics, which increase microbiota diversity and protects the digestive mucus. Finally, they’re anti-inflammatory, which explains their preventive characteristics against diabetes and other metabolic disorders.

In conclusion, nuts are very healthy foods, which should be included in children’s breakfasts and afternoon snacks. As we’ve mentioned before, they’re quite good for their concentration skills. They also help prevent the most prevalent diseases in the present days. And, they prevent neural deterioration that aging produces.

Finally, even though the best way to have them is in their natural form, it’s possible to find them as butters in the supermarkets. They’re amazing on toast, with bananas, apples or pears and cinnamon. Plus, you can use them as toppings for your yogurts. You should definitely try them!

The Right Diet for Increasing a Woman’s Fertility
A healthy diet, physical exercise, and maintaining the right body wieght are all important when it comes to increasing a woman's fertility. Read more »
Link copied!
Interesting Articles
Eating habits for children
The Value of Discipline in Healthy Eating

Children's diet
5 Facts About Lactose that You Should Know

Lactose is made up of glucose and galactose, two simple sugars that the body uses directly as a source of…