How Children Develop Their Food Tastes

Genes have a lot to do with what we like to eat, but it's also influenced by repetition and past food experiences. During our childhood years, these factors are key to developing our food preferences. 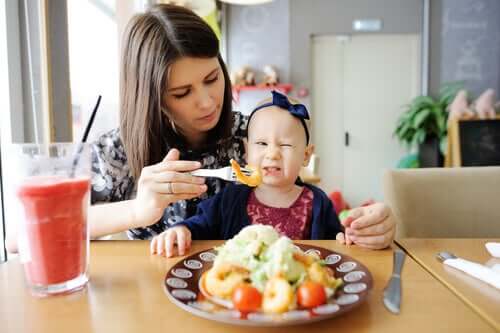 As previously said, genes have a lot to do with what we like to eat or not. But it’s not that simple. Food tastes can change and food habits can be acquired over time. Keep reading to learn more about how children develop their food tastes.

How are food tastes developed?

First of all, everything starts in the uterus. During the first 7 to 8 weeks of pregnancy, fetuses develop taste buds. Through the umbilical cord and the amniotic fluid, babies get all their nutrients from their mothers.

Later on, during breastfeeding, babies start to taste what their mothers eat. Like this, when the baby eats something new, he or she prefers those that taste similar to past meals. Repetition also influences this, as do social environments and what babies feel when they eat. Even your culture can determine your food tastes.

The influence of nursing habits in food tastes

Breastmilk has a lot more benefits than baby formulas, but sometimes babies aren’t interested or mothers can’t produce enough. However, studies show that breastmilk makes it easier for babies to try new foods.

This starts to develop naturally at 4 months of age. By 2 years of age, babies usually crave salty foods. Mothers who eat a lot of salty foods during pregnancy, have a higher chance of giving birth to underweight babies. However, you can educate yourself and your baby to have a less salty diet.

Sweet things never made anyone bitter

Children tend to love sweets. Sweet flavors have always been connected with feeling well due to the zones it triggers in our brains. Just a little sugar can increase children’s heartbeat. We know this because of breastmilk’s sweetness.

Sweetness is also associated with parties and celebrations, it gives us a feeling of joy. Maybe that’s why we eat chocolate when we’re feeling down. However, some genes can make this different for some people. Therefore, some people can only consume a little sugar at once.

Sourness was characteristic of certain green, poisonous, prehistoric fruits. Some people fell ill, and some even died, after eating them. That’s why children can be programmed to hate some foods, like broccoli or Brussel sprouts.

Everybody has receptors on their tongues that are triggered with sweetness or sourness. If your child is sensitive to sugary tastes, then he won’t eat many sweets, for example. Although, after 10 or more tries, he may come around.