Why Are Adolescents Easier to Influence?

Many parents find themselves wondering why their teens are so vulnerable to social influences. Emotional instability and a desire to fit in makes adolescents easier to influence. 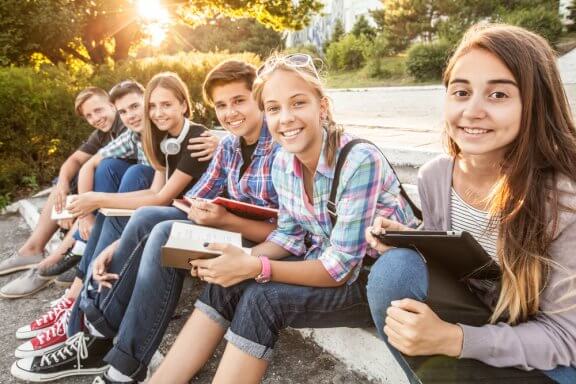 What are teens more vulnerable to influence? Adolescence is the developmental stage when we start to form our identities – that which defines us and sets us apart at the same time.

However, in general, teens don’t exactly want to be different. The fear of being different produces emotional insecurity, which makes teens more vulnerable to social influences.

Adolescents yearn to fit into the their social environment. They want to feel like they’re part of a society and of a group of peers (which has gained a great deal of relevance during this stage). Up until this point, children’s role models or guides are their parents.

However, with the arrival of adolescence, children’s peer groups become a reference point, along with their parents.

When we say that teens are easier to influence, this isn’t something altogether negative. For example, adolescents may choose their college careers thanks to having had a good professor in that subject. Or, for example, they join sports teams or other athletic or recreational activities thanks to their friends.

So, what is social influence and why are teens easier to influence?

Social conformity according to Asch

Salomon Asch was the first to study social conformity. In his experiment involving line comparisons, Asch demonstrated the influence of social groups on individuals.

In his study, individuals had to answer questions, while alone as well as within a group setting (the other group members were actors). The experiment showed that subjects changed their answers depending on whether they were alone or with others.

These results demonstrated how the group opinion influenced subjects. The group pressures the individual to the point where his or her opinion conforms to that of the group, even if that opinion is wrong.

Social conformity is a type of normative influence. Thanks to this theory, we can understand why teens behave differently when they’re at home, in school, or with their friends.

Teens, despite having their own opinions, change their opinions depending on the pressure they feel from others. Therefore, they behave differently with their peers than they do when they’re alone.

The motives that lead to social conformity are varied. For example, adolescents may look to comparisons with their friends, accepting their criteria. They also do this to avoid social ridicule, out of fear of ending up alone.

When teens feel pressured by their social groups, they may end up doing something that, deep down, they don’t want to do. Adolescents change their values because they want their friends to accept and value them. They adapt in order to feel like they’re part of a group.

Based on all of this, it’s important for parents to know how to help their children to handle social pressure:

Youth don’t only change their conduct in order to adapt to their environment. At the same time, social influences are also shaping their identities.

It’s normal for teens to be more vulnerable to their surroundings. This is more true today than ever, with social media posing as a major influence on teens.

Teens are more vulnerable to social pressure because, while they’re discovering themselves, they’re also trying to fit into the world. Because of all of this, it’s essential for teens to achieve balance between being themselves and adapting to their environment.

What Influences the Relationship Among Siblings During Adolescence?
The teenage years are a stage that's full of changes. It's impossible to deny that the relationship among siblings during adolescence is affected. Read more »
Link copied!
Interesting Articles
Tips for raising your child
10 Ways to Strengthen Children's Talents