Rivalry and Affection Between Siblings

The relationship between siblings is vitally important throughout their entire lives. Therefore, one of the main tasks that parents face is educating their children in this regard. In other words, helping them to establish a warm and positive fraternal relationship. 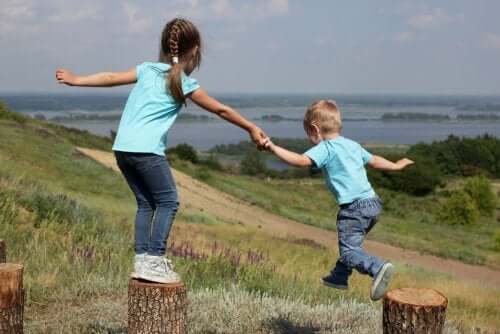 Rivalry and affection between siblings is a family issue that can be cause for great concern among parents. There’s no doubt that the relationship between brothers and sisters is an extremely significant one. This is true whether siblings have a good relationship, or a poor one.

A warm and positive sibling relationship doesn’t just provide an important context for learning development. It also represents one of the most special and irreplaceable relationships a person can have.

Rivalry and affection between siblings during childhood and adolescence

The dynamics of family relationships undoubtedly and inevitably changes with the arrival of a new sibling. These changes have a major effect on older siblings.

Without a doubt, breastfeeding is a tiring phase that affects a mother’s sleep routines, especially during the first months. Mothers often find themselves exhausted during this stage, which affects their relationships with their older children.

Naturally, they don’t have the same time, patience or energy to dedicate to older siblings as they did before. As a result, big brothers and sisters tend to increase demands in an attempt to regain lost territory.

With the arrival of a newborn, the parents’ perception of older siblings can also change. Their demands often increase and, therefore, so do punishments. In the face of this reality, older brothers and sisters start to experience jealousy.

This may manifest itself through negative reactions towards parents, or through a series of protests. For example, refusing food, not wanting to go to school, vomiting, and problems sleeping.

However, their behavior towards their new sibling tends to be ambivalent. On the one hand, there may be acceptance (hugs, kisses) and on the other hand, rejection (aggression).

According to child psychologist Talia Velasco, this ambivalent attitude is a reflection of two contradictory emotions. On the one hand, older siblings experience jealousy. At the same time, however, they also feel a strong affectionate bond with their baby brother or sister.

When adolescence arrives, siblings may also enter into conflict. This is true even in the case of children who enjoyed an affectionate and peaceful relationship as children.

One of the causes behind this distancing of siblings has to do with a search for increased autonomy and intimacy within the family context. At the same time, sibling dynamics may also change as a result of a difference of interests when the older sibling reaches adolescence.

In many cases, the adolescent sibling refuses to interact or play with the younger one. However, the younger sibling, in an attempt to capture the attention of his or her older sibling, will end up producing annoyance.

It’s common for jealousy and rivalry to arise during childhood. However, little by little, siblings come to forge a special and exclusive relationship. This relationship between siblings is profoundly different from the relationship they have with their parents.

Brothers and sisters spend many hours a day and a great deal of time together throughout their lives. The relationship between siblings is probably one of the longest lasting when it comes to close relationships. Therefore, they will share many moments of happiness and pain.

Mary Ainsworth describes a series of observations regarding the bond between siblings:

“Sisters function as safety nets in a chaotic world simply by being there for one another.”

Do parents have an influence when it comes to rivalry and affection between siblings?

In their study regarding Sibling Relations and Their Impact on Children’s Development, Nina Howe and Holly Recchia demonstrated the importance of parents employing development strategies that are appropriate for their children’s ages.

According to their research, the strategies that parents use to handle conflicts between siblings teaches them how to get along with others.

Among the different parental strategies, Howe and Recchia make a distinction between constructive and negative strategies. Positive approaches involve negotiation in order to resolve conflicts. Destructive approaches use methods such as force and aggression.

Often, and involuntarily, parents contribute to sibling rivalry. For example, when they make constant comparisons between their children.

This sends an unfortunate message to children and teens. They perceive that they must meet a certain standard to earn their parents’ affection, rather than be themselves. At the same time, children’s self-concept becomes damaged. They develop feelings of resentment towards their brother or sister who seems to meet the standard.

It’s a well-known fact that the relationship between siblings is complex, and each relationship is unique. There are siblings who enjoy a strong, positive bond, while others have very broken relationships.

It’s the task of parents to educate their children in love and mutual support between siblings. In doing so, they help to establish one of the most authentic and wonderful relationships that exists. 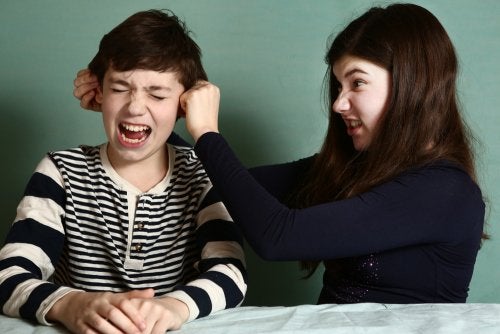 Strategies to Help Control Sibling Rivalry
Tension between siblings can be an issue in certain families. In this article, we'll share a few strategies to help you control sibling rivalry. Read more »
Interesting Articles