My Child Suffers from Frequent Nosebleeds: What Should I Do?

If your child suffers from frequent nosebleeds, this article is definitely for you. Read on to discover what to do! 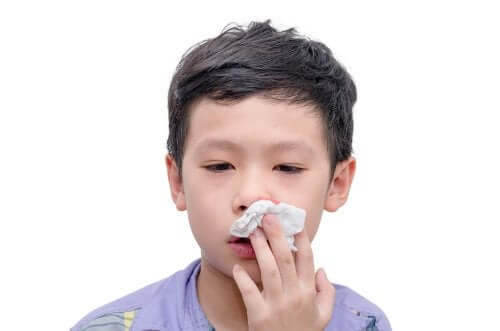 Many concerned parents take their children to the pediatrician when they suffer from frequent nosebleeds. Although seeing blood always startles parents, nosebleeds shouldn’t alarm them.

Children up to age 10 often suffer from frequent nosebleeds. They can have them two to three times a week and, although it’s alarming, it usually doesn’t indicate any pathology.

In this regard, you should also know that sometimes blood can come from the back of the nose, making children swallow it and causing vomiting.

Causes of frequent nosebleeds in children

There are several reasons why children can have frequent nosebleeds. These are some of the most common ones:

Other things to consider

What to do if your child suffers from frequent nosebleeds

When you should take your child to the doctor

In some situations, you should take children to the pediatrician when they have a nosebleed:

As you can see, the causes of frequent nosebleeds are quite common: colds, allergies, blows, and some children’s propensity to sticking things in their nose. You have to convey to your child that there’s nothing to be scared of, as this can help him or her feel better.

How to Treat and Prevent Nosebleeds in Children
Nosebleeds in children can scare parents, especially if they happen often. Find out in this article what causes nosebleeds and how to treat them. Read more »
Link copied!
Interesting Articles
What should you know?
The Differences Between Convergent and Divergent Thinking

What should you know?
Excessive Screen Time Syndrome

No medical or psychiatric manual has recognized excessive screen time syndrome. However, it exists and it has become more common…