Should You Let Your Children Sleep with You?

As parents, we've all wondered whether or not we're doing the right thing by letting our children sleep with us. All issues like this one have their advantages and disadvantages, but the decision is always the parents'. And, whatever their choice, it's sure to be the right one. 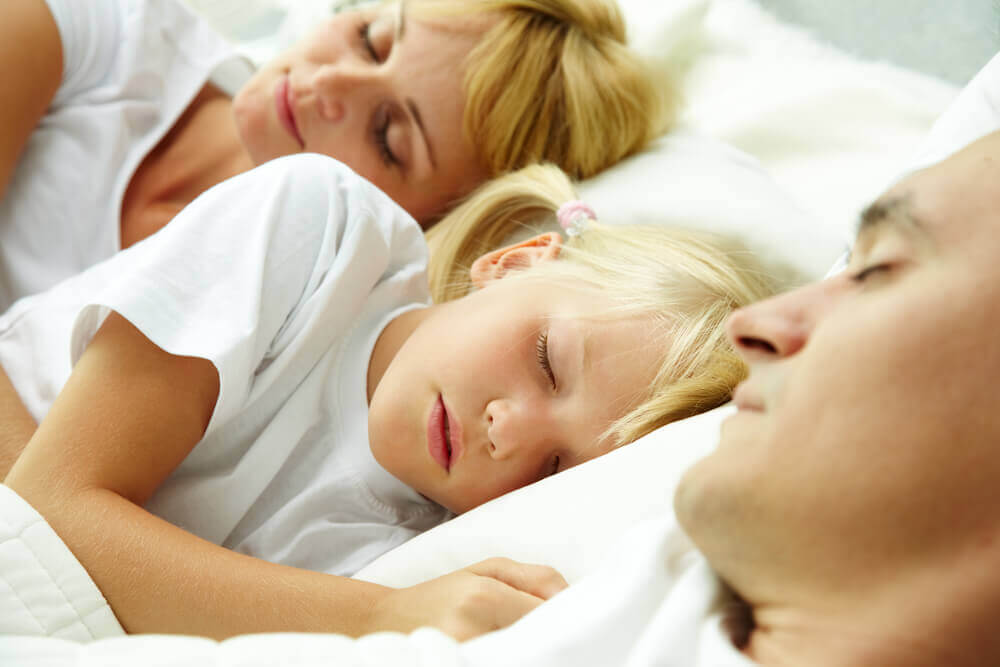 The eternal dilemma that many parents have to decide is whether or not to let their children sleep with them. It’s a fact that, in many homes, infants cry for a bit of comfort. If they’re older, then they often get up and go to their mom and dad’s bed looking for a bit of company.

Some parents wonder if they should let them sleep with them. What should you do? Many let their child stay in their bed just so that they’ll get off to sleep again, and also to not have to get up and take them to their own bed. But is this the solution? Is this the right thing to do?

There are many discrepancies here. People who study parenting are divided into two groups: those who support parents letting their children sleep in their bed, and those who maintain that children have to sleep alone.

Benefits of letting children sleep with you

If a baby sleeps in the parents’ bed, it makes it easier for the mother to breastfeed without having to get up. In this way, she’ll rest better and breastfeeding will be much more comfortable. Another benefit here is that the more times the baby feeds during the night, the more milk the mother will produce during the day.

Moms, especially if they’re first-time moms, worry about their baby stopping breathing and constantly get up to check on them. When they sleep in your bed then that worry disappears, because they notice their breathing and can check it every time they wake up.

Children who sleep with their parents sleep more

Experts tell us that it seems to be a proven fact that babies who sleep with their parents have a better sleep. When they wake up and notice their parents nearby, they immediately go back to sleep. However, if they’re on their own, they’ll often cry out to their parents out of pure survival instinct.

At certain ages, children aren’t able to understand why their parents are sleeping in another room and that’s why they’re opposed to sleeping alone.

Babies need contact with the mother in order to feel safe and to build bonds of affection.

As adults, they’ll have higher self-esteem

Some people maintain that this practice improves self-esteem as an adult. In addition, they say it reduces behavioral problems and facilitates independence. However, there’s no scientific evidence to support this at this time.

Disadvantages of letting children sleep with you

When children sleep with their parents, it invariably means that the parents don’t get enough rest. Children move around a lot while they’re sleeping, they kick, they wake up. This often makes it impossible for the parents to get a good night’s rest.

The couple’s sex life is affected

If the child always sleeps with the parents, then, in the end, the couple’s intimacy and sex life will be adversely affected. However, if you have a bit of flexibility in these matters then there’s the option of looking for other times to get intimate – times that don’t coincide with your child’s sleeping schedule.

Delays the evolutionary development of children

This especially applies to children around the age of seven or eight who sleep with their parents. Children need to have their space and get used to it. If they don’t, then it can be damaging to their development.

Getting them used to bad habits

There’s a lot of debate about this. Some think that the fact that a child wants to sleep with their parents isn’t a bad habit. On the other hand, there are those who think that if parents allow their children to sleep with them, then they’re spoiling them too much. They think it’s better for them to sleep in their own bed because they need their space in order to develop correctly.

We make them emotionally dependent on the parents

Sleeping in the parents’ bed can mean that children become emotionally dependent on their parents and don’t develop their independence and autonomy as they should do.

As we’ve seen in this article, this is an issue that is debated strongly between those who are for and against children sleeping with their parents.

In conclusion, the most sensible thing to do is ensure that whether or not their children sleep in their bed is the parents’ decision, not the child’s. What they want to do, and what they feel comfortable doing will be the right thing to do for them. The most important thing is that it works well for them.

A New Mother’s Sleep after the Birth of Her Baby
After a mother gives birth, her sleep may be affected. In this article, we'll share some recommendations to mitigate the effects in a new mother's sleep. Read more »
Link copied!
Interesting Articles
Tips for raising your child
Safety Rules for Going to the Beach with Children