The 5 Kingdoms of Living Things for Children

There are millions of different living beings that exist on our planet. By classifying them, we can discover the marvels of nature and its diversity. 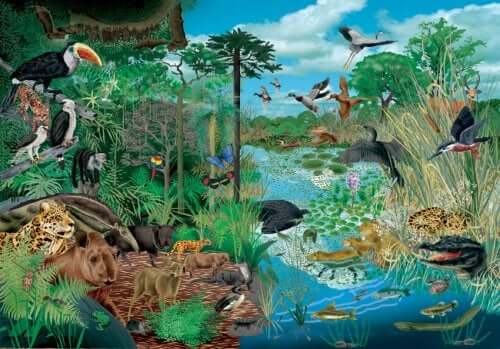 It’s very important to instill in children a love for nature and respect for the environment. But in order for that to happen, kids need to learn about our planet first. Not all children are lucky enough to live in the countryside – or even have access to a backyard. But when you can escape to the great outdoors, we’ll help you offer a simple explanation of the 5 kingdoms of living things, which your children can observe while outside.

Until the 19th century, all living things were divided into two large kingdoms: Animalia and Plantae. However, since that time and with the help of new observation technologies, scientists have discovered many new living things. But not all of them – like fungus and bacteria – fit into the two existing kingdoms.

In biology, each kingdom represents a great subdivision of living things according to certain taxonomic characteristics and the evolutionary relationship among them. In other words, in order for an organism to belong to a specific kingdom, it must possess the general and shared characteristics of the kingdom.

So, although a squirrel and a shark may seem to have nothing in common, they actually belong to the same group. That is the Animal Kingdom. At the same time, each kingdom contains different categories or taxons in order to classify its members. These six taxonomic categories are the following:

The last taxonomic category, species, is what determines who we are. It’s the identity of all the individuals that belong to this classification. Scientists have chosen words with Greek and Latin origins to give each species its scientific name.

We have Swedish explorer Carolus Linnaeus to thank for this binomial nomenclature. Linnaeus was a naturalist, scientist, botanist, and zoologist in the 18th century.

The 5 kingdoms of living things for children

Bacteria, archaea, and microplasmas belong to this kingdom. Antonie van Leeuwenhoek was the first to observe bacteria in the 17th century, which he called “animalcules.” Archaea are the oldest living organisms on the planet, having been around for some 3800 million years. Members of this kingdom share the following characteristics:

This kingdom is a bit of a mixed bag. Every organism that doesn’t fit into the other four kingdoms ends up here. Kingdom Protista encompasses both unicellular and pluricellular organisms. It includes protozoa and algae, which are very different from one another. However, there are certain characteristics that define the members of this diverse group.

Fungi is another one of the five kingdoms of living things. Some fungi are also known as mushrooms, and these can be delicious – like the Boletus edulis. Others can be extremely poisonous, like the Amanita muscaria or toadstools.

This kingdom is made up of all of the different plants that inhabit the earth. It includes the largest trees on the planet, like Sequoias that reach over 300 feet high. And it also includes the tiniest ones, like the Wolffia, which measures only 1.3mm.

This is the broadest group of all the kingdoms. Animals inhabit every part of our planet, including oceans, jungles, and deserts. They consist of invertebrates, like butterflies, Chondrichthyes (sharks, for example), and vertebrates, like human beings.

Conclusion on the 5 kingdoms of living things…

We hope the information you’ve found here is useful as you teach your children about the five kingdoms of living things. What’s more, we hope it helps you and your family appreciate and enjoy nature even more than before.

“That love of living things is man’s most noble attribute.”

Playing is the main way in which children discover the world around them and learn to interact with it. And,…