Appendicitis in Children. Symptoms, Causes and Everything You Need to Know 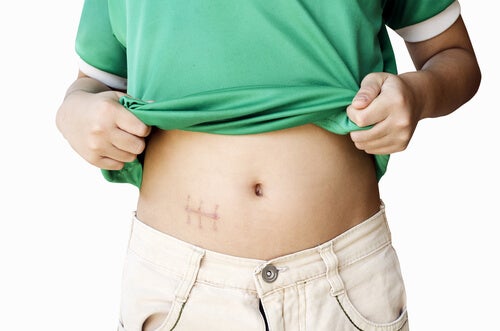 Appendicitis is the inflammation of the appendix and it can be caused by an infection. Appendicitis doesn’t occur frequently in children under the age of three.

The appendix is located in the large intestine. It’s a small tube and its specific function is still unknown.

When the appendix becomes inflamed, it has to be removed. It isn’t a high-risk surgery and recovery is usually quick.

Since some of the symptoms of appendicitis resemble those of common abdominal pain, we’ll give you some tips that will help you know when to take your child to the doctor.

Symptoms of appendicitis in children

Don’t hesitate, consult your doctor if you notice that your child is experiencing uninterrupted pain for more than one hour.

The most serious complication of appendicitis is when the appendix bursts. This could cause an infection of the small intestine.

Causes of appendicitis in children

There are many factors that could lead to the inflammation of the appendix, here are a few:

The body’s happiness is based on health

There is no specific treatment for this condition. It can only be solved by removing the appendix (in the case that it has not bursts).

The surgery to take out the appendix is called an appendectomy. It’s a fairly common and simple surgery. It requires general anesthesia, your little one won’t be bothered by anything during the operation.

The extraction of the appendix doesn’t interfere with a person’s life. There is no need to worry – your child won’t have any limitations after they recover from the operation.

Measures to take after an appendectomy

After your child is discharged from the hospital, you can take them home. The most important thing at this stage is to keep the surgery site clean.

Your child doesn’t have to follow a specific diet after their operation, they can reincorporate their regular diet. When it comes to other activities around the house, your child should be free to do whatever they feel capable of.

Keep in mind however, that rest is important during the first few days after getting home.

Although we mentioned above that appendectomies are fairly common procedures, there are some precautions that parents must take. If you notice any of the following symptoms after the operation, consult your doctor immediately.

Most parents don’t know a lot about the signs and symptoms of appendicitis in children. As parents, we feel that we have to protect our children from everything. Here are some tips that you can apply.

If your child has to be operated on for appendicitis, don’t hide it from them. Your child may be scared, but explain to them that many children go through the same situation. Explain what it is that they have and what they have to do to cure it.

As a parent, don’t get overly concerned if you notice a few symptoms. Keep in mind that the only valid diagnosis comes from the child’s doctor.

Don’t hesitate, ask your child’s doctor about any concerns you may have about appendicitis, the operation or measures to take after the operation. Make sure your child has good memories about their hospital stay.

Even if they’re only staying for a few days, make sure you remind them about how brave and strong they are.