Antiseptics and Disinfectants for Children's Wounds

In this article, learn all about the most common antiseptics and disinfectants for treating children’s wounds. 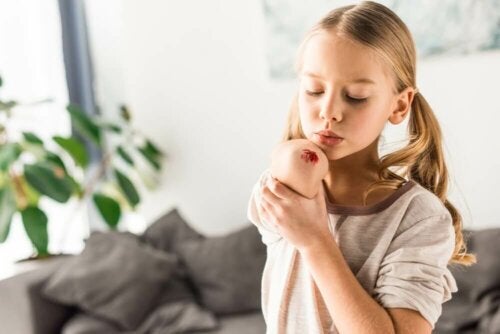 Antiseptics and disinfectants are chemical substances used to prevent the appearance of infections in skin wounds, which are very common in children.

Wounds are very common in children. They appear after a blow, a cut, or a scratch on the skin. In this regard, they’re characterized by bleeding that can be more or less heavy depending on the area of the wound and its severity.

In this regard, it’s important to know how to heal a wound and how to stop possible bleeding. Antiseptics and disinfectants help in this process, preventing the wound from becoming infected, as well as other complications.

Antiseptics are substances that destroy or inhibit the growth of microorganisms when applied to live tissues. They’re used in wounds to prevent infection or treat it if it has occurred.

Sometimes, the correct use of antiseptics avoids the need to use antibiotics. Thus, it’s important to know about them.

On the other hand, disinfectants destroy microorganisms and prevent infections when applied to inert surfaces or materials. Sometimes, medical professionals also use them on the skin, for example, to disinfect it before surgery.

Below, discover the most common antiseptics and disinfectants that can be useful in the treatment of children’s wounds.

The most common antiseptics and disinfectants

This is the well-known Betadine. It works by releasing iodine, which is the antiseptic. You can find different presentations on the market, including:

This drug has bactericidal, fungicidal, antiviral, and sporicidal effects. Experts don’t recommend its use in newborns or pregnant women, due to its iodine content. In fact, it can cause contact dermatitis.

Chlorhexidine is a chemical in the biguanide family. People usually use it in the form of salts. Currently, it’s the most-used antiseptic in the treatment of wounds.

It acts quickly after its application. In this sense, it breaks the plasma membrane of microorganisms through osmotic alterations and inhibits enzymes. It has bactericidal and fungicidal effects.

Trade names include Betasept, ChloraPrep, and Chlorostat. This drug is widely used in wound healing, as a disinfectant and, also, to clean babies’ umbilical cords, among other indications.

Many types of mouthwash or kinds of toothpaste contain chlorhexidine, as an antiseptic for the prevention of oral infections. For example, it’s useful in gingivitis processes.

Although very popular, you should never apply it to an open wound. It has bactericidal activity, greater when it’s 70% than 96%. However, it’s very irritating.

Hydrogen peroxide is also very popular for wounds. However, it causes stinging and burning on open wounds and it has weak bactericidal action.

Merbromin is another classic antiseptic for wound disinfection. It’s the active ingredient of the well-known Mercurochrome. Nevertheless, it often causes hypersensitivity reactions and only has bacteriostatic and fungistatic effects.

Conclusion on antiseptics and disinfectants for children’s wounds

As you’ve seen, you can use different antiseptics and disinfectants to treat your children’s wounds, following the guidance of their doctor. However, we can conclude that chlorhexidine is the antiseptic of choice nowadays.

Some studies, which compared the efficacy and safety of povidone-iodine and chlorhexidine, concluded that the latter is more effective, more durable, and takes less time to work. Also, it’s cheaper and has fewer side effects.

Practicing Pediatric First Aid: Parenting Tips
One of the most important things you can do as a new parent is to learn basic pediatric first aid and be prepared for the unexpected. Read more »
Link copied!
Interesting Articles
Bumps and bruises
Jellyfish Stings in Children: What You Need to Know

Bumps and bruises
What Is Toddler's Fracture and How Can You Treat It?

Toddler's fracture can be quite common in children who are learning to walk. Although it isn't very serious, it can…