Pancreatitis in Children: What You Should Know

One of the most common conditions in children is pancreatitis, which is often confused with digestive problems. 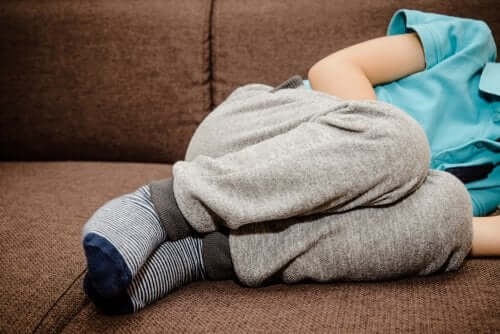 Pancreatitis in children is a disease that can have serious consequences. In addition to causing a lot of discomfort, it can lead to a number of long-term complications if it isn’t treated and controlled in a timely manner with a specialist.

Pancreatitis is a condition that occurs when the pancreas becomes inflamed. This causes a lot of pain and a state of irritability in children. It manifests acute and idiopathically. In other words, it can last a short time and manifest without an apparent cause.

The pancreas is an organ located in the upper abdominal area, behind the stomach. It produces chemicals called enzymes, which digest food. Most of the time, enzymes only activate after reaching the small intestine.

When the enzymes activate in the pancreas, they digest all its tissue. This causes fever, severe abdominal and back pain, bleeding, vomiting, swelling, and damage to the organ and its blood vessels. This is known as pancreatitis.

What can cause pancreatitis in children?

There are various types of pancreatitis. For example, acute pancreatitis appears suddenly and usually lasts a short time. Chronic pancreatitis develops gradually and reappears. Although it’s rare in children, it can also occur due to genetic load.

Diagnosis of pancreatitis in children

If this condition is suspected, the first thing to do is take your child to the doctor for amylase or lipase blood tests. These tests will determine whether the levels of the enzymes produced by the pancreas are normal.

If those enzyme levels are higher than normal, the pediatrician will probably order an abdominal ultrasound to detect any inflammation, obstruction, or stones in the pancreatic duct, which connects to the first part of the duodenum, among other anomalies.

Also, it’s advisable to request an abdominal CT scan, which uses X-rays and computer technology to produce more detailed images of the body’s internal organs. This will help confirm whether the child has pancreatitis or not.

In many cases, pancreatitis resolves on its own. Sometimes, pediatricians recommend low-fat diets and drinking plenty of fluids. This is less likely to irritate the pancreas and helps it heal faster.

Children with more severe cases of this disease can end up dehydrating. Thus, it’s best for them to spend some time in observation at a hospital.

Treatment involves letting the pancreas rest. This can be achieved with the intravenous administration of fluids and drugs, without the child ingesting any food.

How to differentiate pancreatitis from stomach pain

The main difference between pancreatitis and a stomach virus or another digestive system condition is the intensity of the abdominal pain. Children who are affected by this disease have stabbing pain in the upper part of their abdomen, which makes it difficult to remain standing or sitting.

Due to the pain, the child tries to stay in a fetal position in order to feel more comfortable and some relief. After the third day, the symptoms of the condition tend to worsen and the child may be irritable or in a bad mood. Thus, parental support and good medical treatment are necessary to be able to overcome this bothersome clinical picture.

Pancreatitis in children is usually a lot more common than many people think. For whatever reason, it can manifest and affect a child either subtly or aggressively. Thus, you must be very attentive to the symptoms and consult a doctor as soon as possible. You must also avoid self-medicating your child.

3 Recipes for Gestational Diabetes in Pregnant Women
Pregnant women are susceptible to different conditions during gestation. Today we'll be looking at some recipes for gestational diabetes. Read more »
Link copied!
Interesting Articles
Illnesses in children
Allergies to Bites and Stings in Infants and Children