What Is Cervical Insufficiency in Pregnancy?

Cervical insufficiency in pregnancy can cause premature delivery. Learn more about it and its treatment in this article. 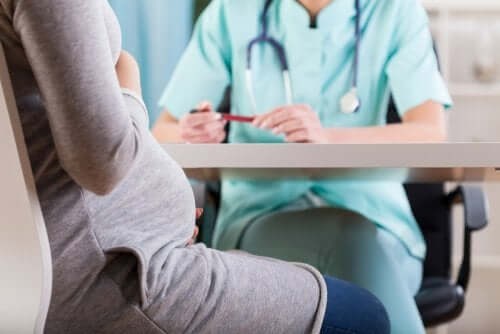 Cervical insufficiency in pregnancy, also called cervical incompetence or incompetent cervix, represents 10% of the causes of preterm birth (before week 37 of gestation) and is associated with significant neonatal morbi-mortality.

What is cervical insufficiency in pregnancy?

Cervical insufficiency in pregnancy refers to cervix dilation in the absence of contractions before week 37 of gestation. Also, it’s the functional disability to retain gestation before the uterus reaches its delivery size (between 37 and 42 weeks of gestation).

Some women may manifest a sensation of pelvic pressure, increased vaginal discharge, or light vaginal bleeding.

What causes cervical insufficiency in pregnancy?

Although various risk factors can lead to cervical insufficiency, in most cases, it appears even though there’s no previous medical history.

Some of the risk factors are:

How to diagnose cervical insufficiency

Another test doctors may indicate is vaginal examination (pelvic exam), which assesses the consistency of the cervix and its dilation.

To prevent or treat cervical insufficiency in pregnancy, the most-used method medical professionals resort to is cervical cerclage. They can also prescribe vaginal hormone therapy, such as with progesterone, in some cases.

Cervical cerclage consists of suturing the cervix to reduce its expansion and increase its strength. So consequently, it’ll be able to support the weight of the pregnancy and prevent preterm delivery.

This is conducted before any modification appears in the cervix of women with a history of gestational losses due to cervical insufficiency or those who were already treated for it in previous pregnancies.

This is performed on pregnant women with a history of premature delivery who have a cervical shortening (less than 25 mm) before the 26th week of gestation. Initially, medical professionals usually indicate vaginal hormone therapy with progesterone. However, if the modifications continue, they may consider a cervical cerclage.

It’s recommended when, after a physical examination, the medical professionals see that the cervix is dilated more than 2 centimeters with visible membranes through the external cervical os before week 26 of gestation. Experts recommend performing an amniocentesis before the cerclage to make sure there’s no intra-amniotic infection.

In some cases, cervical cerclage is contraindicated:

Before getting a cervical cerclage, you may need other required complementary medical tests:

An antibiotic and corticosteroid treatment is also administered for fetal lung maturity if the cerclage is performed from week 24 of gestation, in case preterm labor were to occur.

In addition, many medical professionals administer medication to relax the uterus and avoid contractions.

After getting the cerclage, the patient will require a stricter medical follow-up to check that there’s no infection and that the cerclage remains well placed. Also, the medical professional will need to analyze endocervical swabs from time to time.

Likewise, the patient needs to reduce their level of physical activity and also avoid sex until the 34th week of gestation.

The medical professional will remove the cervical cerclage after the patient reaches week 37 of gestation, if there are symptoms of intra-amniotic infection, or if labor begins spontaneously and there’s no way to stop it.

Ultrasounds During Pregnancy: What Information Do They Provide?
Several ultrasounds during pregnancy must be done. In this article, discover what information they provide. Read on to learn more! Read more »
Link copied!
Interesting Articles
Pregnancy complications and illnesses
Genetic Syndromes: What Are They and How Are They Inherited?

Respiratory Distress Syndrome (RDS) is a respiratory syndrome that usually happens in newborns. It's triggered by a lack of surfactant…

Pregnancy complications and illnesses
What Is Cytomegalovirus? Causes, Symptoms and Treatment

Pregnancy complications and illnesses
Polytrauma and Pregnancy in Women