What Is Symbolic Thinking in Children?

Symbolic thinking is necessary for children's development in all aspects of their lives. We'll tell you what you need to know in the following article. 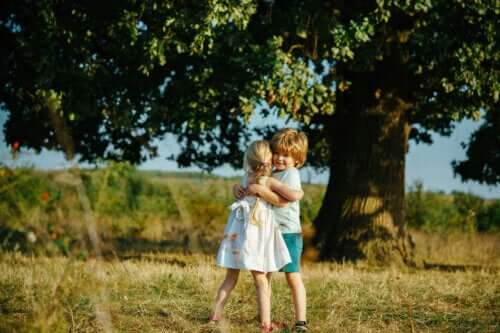 Symbolic thinking is necessary for child development because it helps little ones being to understand abstract concepts. It’s important to help them to develop symbolic thinking at an early age, so that they’ll mature properly as they grow up.

As a parent, it’s easy for you to keep track of your child’s physical development. You know when your child crawls or walks, or when they improve their motor skills. But mental development is different. For parents, it can be more difficult to know if the stages of cognitive development are on track, including symbolic thinking.

As the term implies, symbolic thinking refers to the ability to represent people, objects, and events, even those not present, through the use of symbols or internal images.

In his book The Psychology of Intelligence, developmental psychologist Jean Piaget defines symbolic thinking as the representation of reality through the use of abstract concepts. Below, we’ll talk about this in a clearer way.

What is symbolic thinking?

Symbolic thinking is the use of abstract concepts such as words, gestures, and numbers to represent reality. Evidence of such thinking is generally present in most children by 18 months when signs and symbols (signifiers) are reliably used to refer to concrete objects, events and behaviors (meanings).

The hallmark is language, which uses words or symbols to express concepts (i.e. mother, family). But not only that, language expresses abstract references that transcend concrete reality (comfort, future, etc). It’s also used for the manipulation of intangible objects (mathematical symbols).

According to Jean Piaget, imitation plays an important role in this development. That’s because children are able to imagine behaviors they’ve observed in the past and recreate them as imitated behaviors.

Thus, they construct a repertoire of signifiers which they connect to meaning through the assimilation of events and actions. The development of language arises from symbolic functions – representing something by means of signs or symbols that serve only for that representation. This, in turn, facilitates the development of symbolic thinking – the ability to mentally reproduce the environment according to one’s own experience).

In order to promote this type of thought, it’s crucial that children enjoy symbolic play at an early age. In fact, as early as 18 months and all throughout childhood.

However, symbolic thinking has to do with more than just objects. As children develop the ability to think symbolically, they “make-believe” and imagine themselves as other people or even as animals or fantasy objects.

Symbolic thinking also manifests itself in more concrete ways. Children develop some of these forms from the age of 18 months. At this time, they may use signifiers, such as sounds or gestures, to refer to specific objects or people.

Later, these signifiers may refer to concepts or objects not present, such as a parent or the idea of family. Later, when young children learn to write words, draw pictures, act in plays, or even sing songs, they’re expressing their ability to think symbolically.

In advanced stages, thinking like this allows people to manipulate intangible objects. This comes into play when solving a mathematical equation, for example.

The importance of symbolic thinking

In addition to helping children communicate, this type of thinking is a key element in expanding a child’s imaginative abilities. It fosters development by stimulating self-expression as well as imaginative scenarios and helps children develop their social and creative skills.

Symbolic thinking attributes immaterial notions to concrete things and events. Therefore, it allows children to associate a given event, place, or object with abstract ideas.

This helps form a person’s worldview. And, as they grow older, it allows them to make hypothetical judgments, determine relative values, and express complex emotions.

In short, as you’ve seen, it’s important to consider symbolic thinking in child development. In this sense, parents should pay attention to the evolution of their children’s thinking in order to identify any possible difficulties in their development.